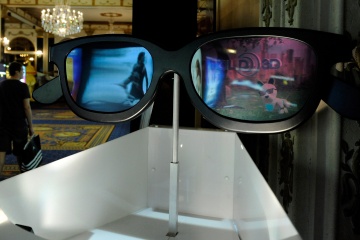 Not for actual use: A huge pair of RealD 3-D glasses on display at ShoWest in 2010.
© Ethan Miller/Getty Images

If you imagine movie projection equipment as a room full of dusty film reels, you'd be taken aback by RealD. It's a system that's digital from the ground up and optimized for movies shot in digital formats instead of archaic film.

RealD 3-D setups generally consist of a computer used to process the 3-D data, a digital projector, a proprietary ZScreen polarization switch, the projection screen and, of course, the 3-D glasses that you wear. The system can be adapted to various digital cinema projectors.

Of course, the 3-D system really all begins with the movie set. You have two eyes that let you see the world in stereo. Because your eyes are about two inches apart, their perspectives are just a little different. That's why directors use dual-mounted cameras to film 3-D scenes. One camera captures images ultimately intended for your left eye; the other, for your right.

After the movie is sent to your local theater, projectionists load the data into a server. This computer sends the data in two parallel streams to the projector, which displays them, quickly alternating between images meant for your left and right eyes. Those images then strike the movie screen and bounce back to your glasses.

The glasses you wear are polarized filters, and the lens for each eye is calibrated to let in light waves that strike the lens at a specific angle. All others bounce away or are absorbed. That means directors can purposely design 3-D effects for every aspect of their movies and project them in a way that makes sense to your eyes.