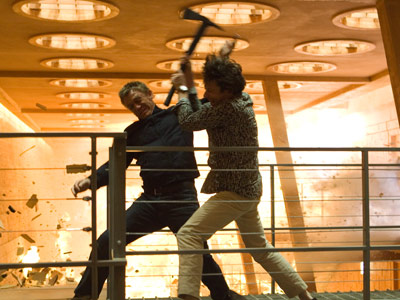 The movie's nonstop action meant more work for stunt coordinator Gary Powell, whose most challenging task was the fight set in an art gallery, where Bond and an adversary "crash through the dome and into the scaffolding and fight from the ropes. It was a small set, only about 40 feet high, and it was really challenging to make it believable," says Powell, who spent weeks choreographing his first version of the fight, then scrapped it. He worked with Chris Corbould's special effects team to ensure that the gallery windows were made of breakaway glass and the structures inside were devoid of sharp edges and constructed of soft aluminum, to lessen the impact when bodies hit them.

The Panama boat chase was complex for different reasons. "You can't predict what the water is going to be like, and with hundreds of boats going through the canal a lot of the time we did have quite a swell," notes Powell. "Daniel had to drive the boat and act and keep his eye out for the other boats. He did most of it, but you've got boats smashing through things and material flying all over the place and it's super dangerous."

­Similarly, Craig did as many of the scenes involving fire as it was safe to do. Of course, "The costumes had to be flame-guarded. We had to make sure he didn't go up like a match," remarks Powell. But as experienced and eager as Craig is about stunt work, his co-stars were less so.

Mathieu Amalric, the villainous Dominic Greene, "does not come from an action background, and rather than try to make him something he wasn't, we used his natural gangly-ness, which made the fight work out really well," says Powell, who also marvels at action novice Olga Kurylenko's transformation into an action babe, thanks to intensive training that began months before shooting started and continued after.

"She was constantly training, really put the hours in," praises Powell, figuring that at the wind tunnel alone, she and Craig "probably did the equivalent of 400 to 500 parachute jumps."

For Kurylenko, "not a big fan of heights," the skydiving simulation was difficult to master. "It's hard to learn because it's so precise. And your whole body hurts afterward. But it's so addictive," she discovered. "They couldn't get me out of there!"

While Powell's stuntwoman girlfriend doubled Kurylenko, the actress, like Craig, did as many of her own physical scenes as she could do safely, but she also suffered her share of minor injuries. In the final fight, "I got bruises and cuts. I fall on the carpet and I'm wearing a tank top so I didn't have protection. The carpet just burned my skin off," she recalls.

For "Quantum's" opening car chase sequence, Aston Martin supplied seven DBS model vehicles, which had their suspensions and tires modified for different surfaces, with a hand brake added so that the stunt driver could drive around corners more easily.­

­As expected, "Not one of them went back in one piece," notes Powell. "Because you sometimes hit a wall when you're not supposed to, we had to have several on standby. Also, while a couple of cars are on set, another is being prepped for use later on. Sometimes we're filming inside the car and other times outside the car." A camera vehicle equipped with an Ultimate Arm mount captured the action.