You might be familiar with Brunhilde. She's a female warrior from Norse mythology and a lead character in Richard Wagner's acclaimed opera cycle, Der Ring des Nibelungen (The Ring of Nibelung). It's an epic drama that includes four operas and a total running time of about 17 hours!

But for some reason, the depiction of Brunhilde is also often used to mock female opera singers. In photos and cartoons, she's always overweight, with huge breasts, and has blonde braids falling out of her horned Viking helmet. So much for not fat shaming.

Now, there's no disputing there's a stereotype that female opera singers are, well, large. But is there truth in the overweight soprano label? Does the fat lady really always sing?

First of all, every opera singer is not overweight. It takes a lot of physical stamina to be an opera singer. Cardio health impacts vocal endurance. However, many opera singers are heavy, including some who are famous for their extraordinary vocal abilities. Although women are called out more for their weight, their male counterparts fit the bill too; the late Luciano Pavarotti comes to mind. Pavarotti, considered by some to be one of the best tenors of all time, was larger than life in more ways than just his voice; he weighed almost 400 pounds (181 kilograms) in the '70s.

But back to the women. Take esteemed dramatic soprano, Deborah Voigt. In 2004, she was unceremoniously fired from a production at London's Royal Opera House for being, well, "too fat for the dress." (Incidentally, Voigt chose to use her severance to have gastric bypass and lost 100 pounds). More recently in 2014, five male critics writing about emerging Irish mezzo-soprano Tara Erraught focused more on her body than her performance.

So does weight have any bearing on an opera singer's vocal ability? Atlanta's Jan Smith, a Grammy-nominated producer, artist and vocal coach to some of music's best — Usher, Justin Beiber, Nicki Minaj, Drake and Ludacris, to name a few — says a singer doesn't have to be overweight to hit those high notes. "For every overweight person whose voice blows you away, there is at least one artist who is not overweight and is equally as talented," she says. "Take Celine Dion. She is tiny, she doesn't have an oversize rib cage or diaphragm. And she sounds amazing."

So if tiny singers like Celine can belt out those notes with the best of them, why the perpetuation of the fat-lady label? There are all kinds of theories, including everything from big bone structures provide more resonating space to large rib cages (and the ability to expand them) give more singing volume and power.

These may all sound reasonable, but there isn't much scientific evidence to support them. "I'm not going to discount that a large rib cage can be beneficial to a singer, but it definitely isn't necessary," Smith says. "Again, look at Celine Dion." Smith actually agrees with medical science and says maintaining a normal weight is healthy for people in general, and that includes performing artists.

There may not be much science to support the extra-weight-is-beneficial-to-singing theory, but that doesn't change the fact that many opera performers believe that losing weight may hurt their career. Case in point: Some say the premature end to influential soprano Maria Callas' career was a result of her 100-pound (45-kilogram) weight loss.

But if fat isn't a prerequisite to great opera singing, then why do so many talented female singers have a lot of it?

One theory is that they become overweight because of the stressful and chaotic lifestyle most successful opera performers live. The traveling, rehearsing and performing are often followed by lonely nights, as Voigt told NPR's Jefferey Brown. "It's a very lonely business, and you go home at the end of the night and it can be just you in your head." The performing lifestyle leaves little time for exercise or healthy eating.

Another reason opera has had many overweight singers is because the singers could get away with being overweight. It was always about the music. But the world of opera, like the world in general, is changing. With advances like HDTV (fans can now stream HD performances of the Metropolitan Opera anywhere in the world) so performances are up close and personal. Physical fitness and appearance matters more than ever, even in opera.

Smith says she likes the idea of setting high fitness standards for everyone. "If you are in great health, it is easier to be great at singing," she says. "It's just like everything else in life, if you don't keep it in good condition, there is a gradual decline. Don't expect soft and flexible vocal cords without doing the work. Singing comes from the inside out, not the outside in. So the condition inside matters."

Now That's Interesting
"The opera ain't over 'til the fat lady sings," is attributed to San Antonio sportscaster, Dan Cook, who said it during a basketball game in the '70s. Cook later said it was a take off on one of Yogi Berra's well known quips, "The game isn't over, til it's over."

Is Raw Milk Better For You Than Pasteurized Milk?

What's the Point of the Bathroom Exhaust Fan? 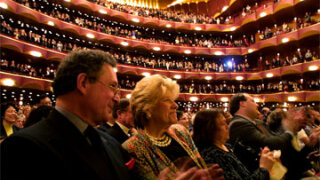 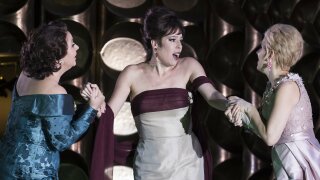 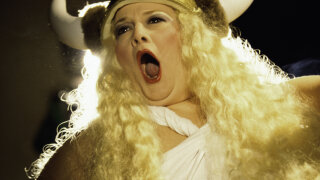 Black Men Were Cowboys Before It Was Cool
July 1, 2020