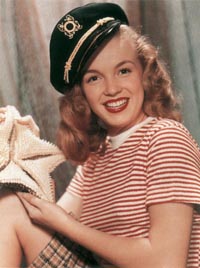 Some of Potter Hueth's photographs of Marilyn ended up on the desk of Emmeline Snively, head of the Blue Book Model Agency in Los Angeles. Snively sent Norma Jeane a brochure and expressed interest in using her if she was willing to take Blue Book's three-month modeling course.

Though the agency's $100 fee almost frightened Norma Jeane away, Snively assured her that the fee could be taken out of her model's salary. Norma Jeane signed a contract with Blue Book in the summer of 1945 and landed a modeling assignment right away, though it was not in front of the camera lens.

She was hired by Holga Steel for a ten-day engagement as the hostess for their booth at an industrial show at the Pan Pacific Auditorium. After the show had concluded, Norma Jeane reluctantly returned to the defense plant but continued to attend Blue Book's classes.

In class, Snively taught Norma Jeane to lower her smile to alleviate the shadow cast by her nose. This modified way of smiling resulted in the quivering lips that would later become Marilyn Monroe's trademark.

For certain modeling assignments, Snively temporarily changed Norma Jeane Dougherty's name to the more sophisticated "Jean Norman." Norma Jeane (sometimes erroneously referred to during this period as Norma Jean) was eager to excel at her new profession and worked hard to please everyone at Blue Book.

She would study every photograph made of her, pick out the ones she thought were not successful, and ask the photographers what she had done incorrectly. She took their advice very seriously and never repeated what she considered to be a mistake.

One afternoon in 1946, Snively sent Norma Jeane to Frank & Joseph's Beauty Salon to have her hair done for a modeling assignment for Rayve shampoo. Frank & Joseph's had built a solid reputation by styling the hair of such Hollywood notables as Rita Hayworth, Ingrid Bergman, starlet Judy Clark, and even professional wrestler Gorgeous George.

On that day in 1946, a timid Norma Jeane walked into the salon and asked if something could be done to make her look better for her shampoo shoot that evening. Tint technician Sylvia Barnhart and shop owner Frank immediately set out to straighten Norma Jeane's hair, which Barnhart has described as "brown and kinky."

The strong solution used in the process also lightened her hair, giving it a reddish-blonde cast. Norma Jeane was quite pleased by the effect and wanted to go blonder. Over the next four to five months, Barnhart changed the color of the young model's hair to a golden honey-blonde by lightening and toning it a step at a time.

Barnhart disputes the oft-told tale that Norma Jeane did not want to be a blonde and that she resisted any suggestion to change her hair color. To the contrary, Norma Jeane felt a lighter color helped accentuate her eyes, which Barnhart has described as "beautiful [and] luminous."

Sylvia Barnhart and Norma Jeane Dougherty became friends during this period; Barnhart often bought lunch for Norma Jeane. Though sometimes angered by Norma Jeane's penchant for lateness, Barnhart never remained angry for long. She recalls that Norma Jeane had her and Frank "wrapped around her finger."

Barnhart continued to style Norma Jeane's hair for the next five to seven years, long after the shy, timid Norma Jeane had become starlet Marilyn Monroe.

In the next section, you'll learn about the events that led up to Marilyn's divorce from her first husband, Jim Dougherty.