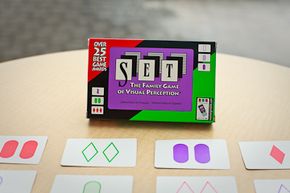 If you randomly draw three SET cards from the 81-card deck, the odds that you'll come up with a match are one in 79. Overall, each deck contains 1,080 unique SETs [source: Zabrocki].
Cards and game © 1988, 1991 Cannei, LLC. All rights reserved. SET® and all associated logos and taglines are registered trademarks of Cannei, LLC. Used with permission from Set Enterprises, Inc. Photo by Casey Pegram/HowStuffWorks.com.

SET® is a deceptively simple pattern-recognition card game with complex mathematical underpinnings. Each SET card has the following variations:

The idea is to lay 12 cards face up, and then match three cards to make a SET. A SET includes three cards with common features: shape, color, shade or number of symbols. However, three completely different cards also can comprise a SET -- their common feature being that they have nothing in common. For example, if one card has a solid red oval, another card has two striped green diamonds and a third has three outlined purple squiggles, it is considered a SET. So for each variable, all the cards have to either be all the same or all different to make a SET. Just remember the "Magic Rule" from the game's makers: "If two are… and one is not, then it is not a SET" [source: SET Game].

SET was invented in 1974 when Marsha Jean Falco, a population geneticist, drew symbols on cards representing genetic combinations so that she could better visualize patterns in her data. The cards made Falco's research easier, but discovering all of the possible symbol combinations proved entertaining, too. Falco introduced the cards to her friends and family, who encouraged her to market it as a game. In 1990, SET went on sale at U.S. retailers and the game became a worldwide phenomenon, making this every man's chess a game for the ages [source: SET Game]. Hundreds of thousands of SET games have been sold since its debut. There are SET tournaments that draw dozens of players , ranging in age from 6 to senior citizen, and the New York Times publishes an online multiplayer version daily. You can play it on your smart phone or iPad, too.

At its core, the game of SET has a rich mathematical structure that follows set theory -- a type of mathematics that studies the behavior of and relationships between sets and has been around since the late 1800s [source: Math Now]. And playing SET teaches problem solving and observation in spades. The game has also been linked to theories about how problems can be simplified and solved in computer coding and geometry [source: Davis].

Although at first SET may seem difficult to understand, it's like most card games: Once you begin playing it, the rules make much more sense. Now that you have the basics, we'll share tips for mastering SET -- plus a 12-card puzzle -- on the next page.

How to Play the Card Game SET 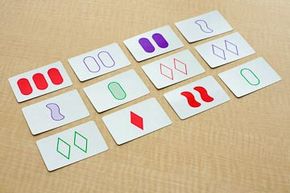 The cards in the rightmost column are not a SET because two are single-symbol cards and one is not; the cards in the leftmost column are a SET because each variable is different. Can you find the other five SETs in this puzzle?
Cards and game © 1988, 1991 Cannei, LLC. All rights reserved. SET® and all associated logos and taglines are registered trademarks of Cannei, LLC. Used with permission from Set Enterprises, Inc. Photo by Casey Pegram/HowStuffWorks.com.

To improve at SET®, a player needs to practice concentration, pattern recognition and quick-thinking skills -- three things the game bolsters every time it is played. Practicing SET builds connections between the right and left sides of your brain as both hemispheres partner up to evaluate, sort and match the images on the cards [source: Felt]. You don't even need a partner to train because SET can be played solo.

However, multiple people also can play SET simultaneously, racing to make the most SETs in the least amount of time. Some mathematics club meetings are organized around the game, and teachers use it in the classroom from elementary through high school to encourage students to whet their thinking skills -- and gain hands-on understanding of mathematical theory. Using the cards, students can work through set theory and its operations, such as union, intersection, complement and symmetric difference [source: Macula].

To play SET, deal a 12-card spread. If the spread does not contain any SETs, three additional cards may be dealt (it can take up to 21 cards to find a SET). All players try to find SETs -- when a player finds one, she points it out, the SET is removed and three new cards are added from the deck. If a SET cannot be made, three more cards are added. Play continues until the deck of 81 cards is depleted and all possible SETs are made. (There may be six or nine cards left over that do not form a SET.) To determine a winner among multiple players, one point is awarded per SET found (and one may be subtracted for each invalid SET pointed out); the player with the most points at the end of the game wins [source: SET Game].

Whichever way you decide to play SET, one thing's for certain: You'll get a mental workout -- whether you realize it or not.