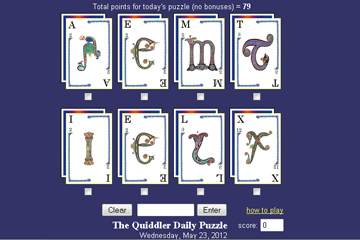 The online puzzle is another addictive (and free!) way to try out QUIDDLER®.
Screenshot by HowStuffWorks.com

The inventor of QUIDDLER®, Marsha Falco, isn't your run-of-the-mill game entrepreneur. Consider that Falco, a population geneticist, invented her first game (SET) in Cambridge, England, as she studied epilepsy in German Shepherds.

For that reason, perhaps, QUIDDLER is often touted as more than just a silly game. In fact, some see it as a very sophisticated way of engaging both the left and right brain. The inventors claim that you're doing just that: While you're recognizing words (what we think of as a right-brain, or creative-minded, endeavor), you're also counting points and strategizing best outcomes (where the logical left brain works) [source: Falco].

Naturally, QUIDDLER is also a great literacy resource for kids and adults alike. It builds vocabulary and strengthens familiarity with words, and it also allows players to suss out how phonemes -- the tiniest sounds in units of language -- work together [source: Mayer, Harris].

As we said before, this isn't just a game for brainiacs or those with a photographic memory for words. In fact, trying to cultivate a long word with many points can prove to be a mistake if you're ignoring all the small words. That being said, attempting to win the bonuses on each round is an excellent strategy. It's easy enough to go out early your first round with the longest word (after all, it'll only be three cards at most) but in subsequent hands, it may be best to stay in longer.

Why? Well, consider that as everyone goes out, you know that the longest word is four letters. Now perhaps you have a four-letter noun in one hand and a two-letter word in another-- as or is, for example. If you add "s" to the four-letter word (making it plural) instead of using both words, you get yourself an extra 10 points. Another tip? Just like in crosswords and Scrabble, it's the short words that make the difference. Learn some two- or three-letter words, and your game will thank you.

If you need some practice to keep that strategy sharp, never fear. The QUIDDLER Web site has a free online game that you can access easily. If you're a student, you might want to convince your teacher to enter the QUIDDLER school competition. It's a kind of national contest for grades K-12 that takes place in the classroom. The winning class receives an assortment of games.

Quiddled enough? Head to the next page posthaste, where you'll find more fascinating facts about this and other brainy games.