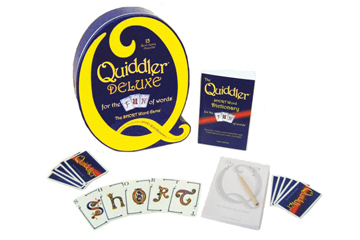 The Deluxe version of the game comes with a few additional items.
Cards and game © 1998 Cannei, LLC. All rights reserved. QUIDDLER® and all associated logos and taglines are registered trademarks of Cannei, LLC. Used with permission from Set Enterprises, Inc.

QUIDDLER® incorporates the wordplay of Scrabble with the strategy and "runs" of the card game gin rummy. It also has the addictive quality of a narcotic, so be prepared: Once you learn the ropes, you might want to play obsessively, convinced the very next card will present you with the letter to rule all words.

First, let's check what we've got: 118 cards, each of which has a letter (a few have two letters) and a point value. The game is eight hands long, and during each hand, one more card is dealt. The first hand is three cards, the next four cards and so on. The overall point of the game is to create words with two or more cards in your hand. So each hand, you'll attempt to put together as many words as you can -- or as many point-heavy words as possible.

Let's play a round to get the idea (up to eight people can play). First, the dealer will deal three cards (first hand, remember). The rest of the cards are placed face-down in the middle. Flip one card over, leaving it next to the face-down pile. Looking at your cards, now decide if you want the flipped-up card or if you want to take your chances and choose one from the face-down deck. After you make your selection, discard a card; you can only have as many cards as the hand initially deals.

Now, see if you can form a word. If you can, great! If you can't, hold tight. And if you can make a word with all your cards, congrats. But don't get too smug; after you use all your cards, each player gets another turn to take the top or the face-down card. After everyone has gone, all the players must lay down all the words they can muster and tally their points. Unused cards (those not able to make it into a word) count against your point total. There are a couple of bonuses: the longest word and the most words will get you 10 points per hand, respectively. (Note that the longest word is the most letters, not cards.)

And so play continues on to the next hand, where four cards will now be dealt. At the end of the eighth hand, the player with the most points wins.

Even cooler? You can play a solitaire version. Deal eight stacks of five cards face-down, followed by a face-up card on each stack. Make a word from the eight cards, removing it to reveal another face-up card. (When a stack is used up, move another card there so there are always eight stacks.) If you can use all the cards to make words, you're a winner!

QUIDDLER®, which markets itself as a "short word game," leaves a lot of room for people to fudge words. But as the game rules state, no proper nouns, prefixes, suffixes, abbreviations or hyphenated words are allowed. It's best to have everyone agree on a dictionary to reference from the beginning so you aren't stuck with disbelieving stares when you're trying to convince fellow players that "em" is word.