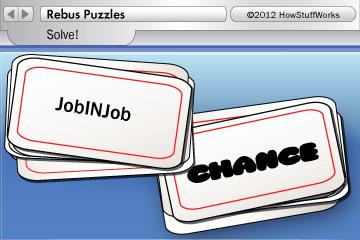 Can you solve these Dingbats-style puzzles? (The answers are in the bulleted list on this page.)

Playing brain games, such as Dingbats, helps keep the mind nimble -- no matter what your age. Logic puzzles encourage the brain to fire up its neurons and increase the number of connections (synapses) between them. In essence, your brain continues to grow and change as it practices problem solving and commits this information to short- and long-term memory [source: Hoiland].

But when you're looking to win (or beat your personal best) in addition to improving your thinking skills, it pays to have a plan of action. Sometimes the answer to the puzzle will quickly come to mind, but if it doesn't, try these strategies [source: Your Amazing Brain]:

If you really become stuck and just can't seem to come up with a correct answer, try reading the card aloud. Case in point: Although I breezed through several rounds of Dingbats, I just couldn't figure out the solution to one particular card. It included a picture of a playing card -- the King of Hearts -- followed by the word "bored."

"Royally bored" was my first guess, followed by "royal bore." I'd become fixated on the "royal" portion of the puzzle and eventually had to pass. It wasn't until later, when I tried to solve the card aloud that it hit me. Card. Bored. "Cardboard." Sometimes hearing yourself say the words can trigger a new connection.