Browse the article How Abalone Works 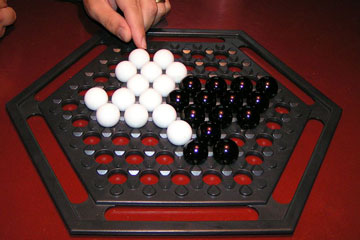 It may look simple, but looks are deceiving.
Stefan Kuhn

The two-player board game of Abalone is an odd synthesis of brain and brawn, in that it’s probably the only strategy game loosely inspired by sumo wrestling. Invented in the late 1980s by two French artists, Michael Latet and Laurent Levi, Abalone was introduced to hip denizens of London’s café society in the 1990s, and it migrated across the Atlantic to become a favorite of brainy American college students, as well. One British newspaper writer described the game as a "fiendishly simple" cross between checkers and Go, the Japanese strategy game [source: Hughes-Morgan]. According to the game’s manufacturer, more than 4 million copies of Abalone have been sold in 30 countries [source: Foxmind.com].

Part of Abalone's addictive appeal is that it can be learned in minutes and has a clear, easy-to-grasp goal -- pushing six of the opponent's 14 marbles off the board by outnumbering them [source: Campos and Langlois]. But as with many of the great strategy games, Abalone's simple concept serves as a tabula rasa, or blank slate, upon which players with sufficient smarts can craft complex, ingenious strategies for victory. Indeed, Abalone is so intellectually challenging that it won an award in 1990 from American Mensa, the society whose members have genius-level intelligence [source: American Mensa]. Portuguese computer scientists found the game so intriguing that they designed Abalearn, an artificial-intelligence program that teaches itself how to play. But it's a measure of Abalone's complexity that the program is only able to compete with intermediate-level human players [source: Campos and Langlois].

In fact, Abalone is so respected among smart people that, along with stalwarts like chess and backgammon, it's included in the annual Mind Sports Olympiad (MSO), a competition that pits top strategy-game players from across the globe. MSO's Web site calls Abalone "a modern classic" and notes that for a mental contest, it also has an alluring sensual quality -- as players push the marbles against one another and make a rhythmic clicking [source: Boardability.com].

In this article, we'll give you some strategy tips on how to win at this seemingly simple, yet beguilingly complicated, strategy game. But first, here are the basic rules for playing Abalone.

How to Play the Game of Abalone

The equipment needed to play Abalone is pretty minimalistic. Basically, all it takes is a hexagonal (six-sided) board with 61 circular spaces, and 28 marbles, half in black and half in white [source: Abalone]. The rules are so simple that Foxmind, the game's current manufacturer, boasts that "they can be learned by almost anyone within a minute or two" [source: Foxmind.com].

In an informal game, you can start out with the marbles arranged however you want on opposite sides of the board. But in tournament play, players begin by putting their marbles in what is known as the "Belgian daisy" configuration. In that setup, each player's marbles are arranged in a hexagon, with the black marbles in the left-hand corner and the white ones on the right [source: Boardability.com].

After that, the players take alternate turns. Each player can move either a single marble or a column of marbles (that is, two or three marbles of the same color that are adjacent and arranged in a straight line) one space at a time. Marbles can be moved either forward or diagonally in any direction. The one exception is that in a "side-step" move, in which marbles are moved sideways into adjacent free spaces, they cannot be used to push an opponent's single marble or column [source: Abalone]. The sidestep move is also known as a "broadside" [source: Boardability.com].

That's pretty much it, except for local variations that players may come up with on their own. Seems simple, right? But Abalone can also be devilishly complex, as we'll explain in the next section.

Because Abalone is a much younger game than, say, chess, there's no extensive library of manuals by experts and grandmasters. Instead, if you're in search of knowledge about strategy and tactics, you'll have to glean them from Internet discussion boards and blogs -- or from playing against the most skilled competition at your local coffee house or college student center. But here are a few concepts that may help.

For more on games that will challenge your brain, check out the links on the following page.