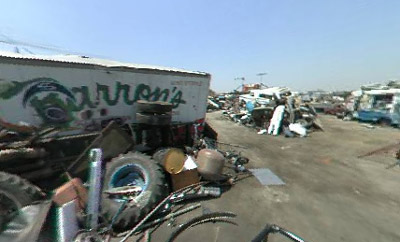 The rules of the game are pretty simple. There are two competing teams, made up of three contestants and an expert who is selected by the producers. The contestants are asked to build a machine to accomplish a specific task, using only the tools and assorted materials at the junkyard site.

On the day of the competition, the contestants arrive at the junkyard, around dawn, with no idea of what they'll be building. As soon as the hosts give them the assignment, the clock is ticking. The contestants discuss the project with the expert, who has prepared some design ideas before the contest. Once the team has analyzed the challenge and decided how to approach the problem, they head out into the junkyard to collect whatever they'll need.

For the rest of the day, the team works on assembling the machine, regularly heading back to the junkyard for more stuff. They have a good collection of tools, including a MIG welder and several high-powered saws.

Most of the hour-long show is devoted to the building process, with the hosts periodically interrupting the two teams to discuss the projects. In the "chalk talk" sections of the show, the hosts explain the science behind the different machines with simple blackboard-style animated diagrams.

At the end of the show, cranes hoist the machines out of the junkyard and they're transported to an appropriate competition area (a large pond for water vessels, for example, or a large field for catapults) and the teams have a couple of hours to fine-tune their machines. Then, it's time to put their machines to the test, head to head in that episode's challenge. The basic structure of the challenge varies a lot from week to week -- it could be a race between two vehicles, or it could be hitting a target, or it could be directed toward a specific goal, such as lifting a car from the bottom of a pond and hoisting it onto dry land.

Whoever wins the contest -- as determined by the judge, another expert in the field -- goes on to face a new team and a new challenge on the next show. At the end of the season, the top teams compete for a trophy (made of junk, of course), which they hold onto until the end of the next season.

On the most basic level, that's all there is to it. But, as we'll see in the next section, there's a little more to the competition than you actually see on the show.