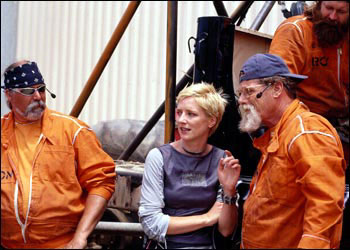 Cathy Rogers, the creator of "Scrapheap Challenge" and "Junkyard Wars," with team members

Like "Trading Spaces," "Who Wants to be a Millionaire" and "The Weakest Link," "Junkyard Wars" is actually a remake of a popular British series -- Channel 4's "Scrapheap Challenge."

The original show, initially titled "Scrapheap," debuted in the U.K. in 1998. It gained a devoted following pretty quickly, and after three seasons, it was a hit all across the U.K. Impressed with the format (and the ratings), Discovery Communications bought the rights to air the show on TLC, under the name "Junkyard Wars." The import attracted a sizable American audience, and TLC commissioned new episodes specifically for the U.S. market. Apart from its American hosts and contestants, "Junkyard Wars" is nearly identical to its British counterpart. Incidentally, the American version is also a hit in the U.K., along with the original.

The series was created Cathy Rogers, who ended up doing double duty as co-producer and co-host in past seasons. According to Rogers, the idea was partially inspired by the 1995 Ron Howard film "Apollo 13," a docudrama about the 1970 Apollo mission, which met with a series of near-disastrous catastrophes. In real life and in the movie, astronauts aboard the Apollo 13 spacecraft and NASA engineers on the ground managed to save the entire crew working with the various items that happened to be onboard. Rogers loved the combination of tense drama and real applied science in the movie, and saw that the same sort of mix would make a cool TV show.