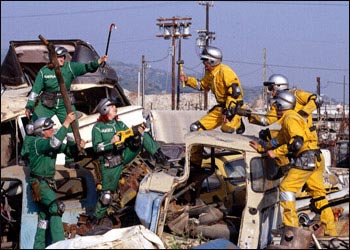 What would happen if you crossed HowStuffWorks with a game show? Quite likely, you would get something along the lines of  "Junkyard Wars". The series frames educational demonstrations of basic technological principles with a raucous, fast-paced, head-to-head contest.

Racing against the clock, two teams scrap together working machines to carry out a particular mission, using whatever they can find in a 5-acre junkyard. At the end of each show, the two teams pit their creations against each other to find out who has put together the best solution to the producers' challenge. It's hard to make science much cooler than that!

To fans of all ages, the formula is an ideal mesh of education and entertainment. The show has the same "real people" appeal of hit reality shows like "Survivor," but contestants compete with pure mental prowess and ingenuity, rather than alliances and plots. And in the end, it doesn't matter so much who wins -- there is no cash reward, just a trophy and bragging rights. It's all about making something remarkable with limited resources.

In this article, we'll find out how this popular show came about, how the teams are selected and how the producers put together each show. As we'll see, there's even more to this popular show than meets the eye.