Was the horse head in 'The Godfather' based on a real event? 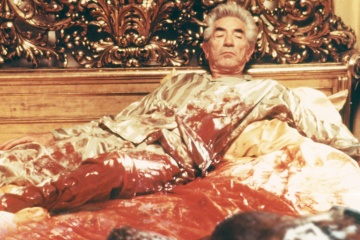 We cropped out the horse head for all the squeamish folks out there. You're welcome.
Silver Screen Collection/Moviepix/Getty Images

As far as movie scenes go, it's a pretty shocking one, right up there with the shower scene in "Psycho." In "The Godfather," movie producer Jack Woltz refuses a request from the Corleone family to cast Johnny Fontane (Don Corleone's godson) in his new film and makes a bunch of anti-Italian slurs in the process. When Woltz wakes up the next morning, he finds the severed head of his prize thoroughbred in his bed. It's bloody, gruesome and utterly unexpected (well, at least it was in 1972). But is it based on a true story, or did author Mario Puzo make it up?

There's no evidence that a real-life horse-head incident inspired Puzo to write the scene. In fact, Puzo had always claimed that he had never even met any mafiosos until after he finished the "Godfather" novel, which became a worldwide best-seller in 1969. Everything in the book, he said, came from his imagination or through researching documented events, and there were no official reports of severed horse heads at that point (although there have been several copycat incidents since then).

It was a real horse head, though. The plan was to use a fake, but director Francis Ford Coppola wasn't satisfied with that look, so crew members found a horse that was scheduled to die at a dog-food manufacturer. The scene was filmed when the horse's head arrived, packed in dry ice.

It's also widely assumed Puzo did have real-life inspiration for the characters involved in this grisly plot twist -- specifically, that he based the character of Johnny Fontane on Frank Sinatra. Fontane is a struggling singer and actor who, after the horse slaughter, gets the part in Woltz's film and goes on to win an Oscar. Sinatra allegedly used his Mafia ties to shake down Hollywood producers for parts. One of his targets was said to have been Harry Cohn, producer of the 1953 film "From Here to Eternity." Cohn didn't want to hire him, but after some friendly persuasion, Sinatra won the part and then an Oscar, which revived his flagging career. Again, there's no indication that any horses were decapitated in the pursuit of this goal, but Sinatra was apparently so incensed by the rumors that he threatened and verbally abused Puzo in a Hollywood restaurant in 1970. He also successfully sued the BBC in 1972 for suggesting that he had been the inspiration for Fontane.

In the decades since "The Godfather" became a classic, the severed horse head has taken on a life of its own, for lack of a better phrase. It's now a common cultural reference, a punch line in sitcoms and shorthand for "you're dead." You can even cuddle in bed with your own (non-bloody) horse-head pillow. It's a scene Mario Puzo couldn't have come up with even in his wildest imagination.