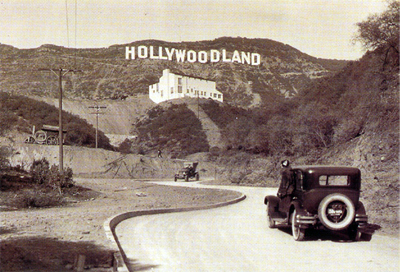 The original "Hollywoodland" sign in the 1920s.
Public Domain

The huge HOLLYWOOD sign in the hills above Hollywood, CA is one of those iconic things that everyone has seen a million times. But have you ever wondered where it came from?

It all started in 1923. Imagine if you will a large developer who owns a lot of land in LA. The developer, named Hollywoodland Realty, is planning to open a new development. They want to get the word out, and apparently there are no sign or zoning ordinances to get in the way of a really, really big sign.

So Hollywoodland Realty put up a gigantic sign that said HOLLYWOODLAND. The letters were 30 feet wide and 50 feet high. They were lit by thousands of light bulbs (so many bulbs that a guy lived in a cabin near the sign and replaced burned out bulbs every day). And the sign was located high in the hills where everyone could see it.

By the 1940s the sign was abandoned and falling apart. The Chamber of Commerce took over the sign in 1949, repaired it and removed the last four letters.

The letters on the sign today are 1.5 m (5 ft) shorter than the original.
Photo courtesy of PD Photo/Photographer Jon Sullivan

By the 1960s the sign was falling apart again, as was Hollywood itself. That's hard to imagine today, but Hollywood had a noticeable decline in the 1960s. In 1977, Hugh Hefner organized a fundraising drive and fixed the sign again. Hollywood recovered, obviously, and the sign is likely to be a part of the landscape for centuries to come.  The sign is now in the care of the Hollywood Sign Trust, which completed another refurbishment of the letters in November of 2005.