What does a greensman do on a film set?

by Alison Cooper
NEXT PAGE 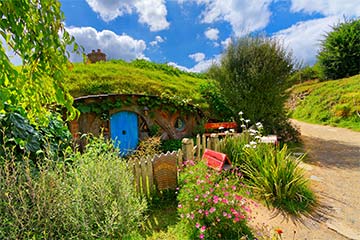 The greensman was probably very busy on the set of "The Hobbit." Here's a shot of Hobbiton, filmed in Matamata, New Zealand.
Anna Gorin/Getty Images

As strange as it may sound, every tree, bush, flower and vine you see in a movie (unless the scene was filmed outside, of course) has been rented -- usually from one of the enormous warehouses in Los Angeles that offers just about any kind of foliage imaginable, real and artificial. The member of the film crew who's responsible for renting, replanting, arranging, taking care of, and ultimately returning all these plants is the greensman.

Most of the greensman's work is done on a soundstage, creating backyards, jungles and forests on a concrete floor with varying degrees of natural light. For obvious reasons, the greensman usually isn't needed for outside shoots, but sometimes he or she will be called in to augment a location's existing greenery.

The greensman is a member of the art department, working closely with the production designer, set decorator, and special effects team to realize the director's vision for the movie's natural environment. In pre-production the greensman does a lot of research, figuring out what vegetation will be needed for every scene. Once the art department's budget has been finalized, the production designer will usually provide sketches for the greensman, who then gets to work on the rentals. The greensman is also often called upon to provide continuity by replicating outdoor scenes that have already been filmed.

The greensman's job, not surprisingly, involves a whole lot of physical labor. On many shoots there's only one greensman, and on big-budget films there might be three. So he or she might be the only person hauling trees around, digging holes, watering flowers, and moving plants for weeks on end -- and then taking everything back to the rental company after the film has wrapped. The greensman is generally one of the first to arrive on set in the morning, to make sure all the greenery is set up correctly before filming starts. He or she will then observe rehearsals and adjust the plants as necessary. After the initial setup, though, the workload does get a little lighter for the rest of the day.

Depending on locations, the greensman often doesn't work every single day of a shoot. At an outdoor shoot, the greensman is also responsible for set safety -- making sure none of the plants, bushes or trees could cause injury to any of the talent or crew. On a very low-budget or nonunion job, the set decorator doubles as the greensman, and the set decorator is always in charge of houseplants, bouquets and other indoor vegetation.

A college degree usually isn't necessary, but if you're interested in a career as a greensman it never hurts to have studied horticulture, botany or landscape design. Greensmen sometimes start out as set designers and then gravitate to the greenery, and some work at gardens or garden-supply companies before branching into film work. Plenty of greensmen make a career out of it, but it's also common for a greensman to move up to production designer or set designer.