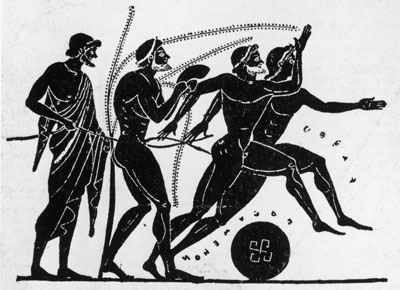 Much of our knowledge about the ancient Olympics comes from engravings on ancient pottery, like the scene drawn on this 5th century B.C. vase.
Hulton Archive/Getty Images

Some ancient texts hold clues that the games may have begun at Olympia as far back as the ninth or 10th century, B.C. [source: University of Pennsylvania]. The city of Olympia was located on Pelops, a western island in the chain of Greek Peloponnese islands. Yet another legend claims that it was on this island that Pelops (for whom the islands were named) initiated the first games. According to Greek mythology, Pelops, Zeus' grandson, became the darling of Mt. Olympus when the gods resuscitated his young body after his father killed him and served him to the gods for dinner. The gods took pity on Pelops, and revived him. Pelops became a great warrior, and reputedly, quite an Olympic athlete.

Whether or not Pelops established the games, Olympia is undoubtedly the site where it all began. Olympia was revered as a holy city and was the destination of many pilgrims who came to see the temple of Zeus (read more about it in How the Seven Wonders of the Ancient World Work).

The first Olympics evolved out of a religious festival that honored Zeus. Greeks convened from all expanses of the empire to attend the celebration. Whether it was Zeus, Herakles or Pelops, someone decided that it would be a good idea to honor the mortals, too, by showcasing their athletic prowess. The idea behind the Olympics was twofold: to exhibit the talents and development of young citizens and to bring Greeks together in a friendly, diplomatic setting. Not only were the games an athletic venue, they were also a time for political congress. In an unsettled and somewhat volatile warrior's world, the Greeks used the games as an opportunity to establish friendly connections with their neighbors and make allies.

­Because participants traveled from all corners of the Greek world to compete, it became necessary to protect them from the sometimes treacherous paths they traversed through hostile towns -- as well as the hostile politics they occasionally encountered at the games. In the ninth century, the city-state of Elis came up with the idea of an Olympic Truce. The truce, or Ekecheiria, called for a military cease-fire among all spectators and athletes [source: International Olympic Committee]. Just prior to the games, heralds from Elis traveled from city-state to city-state to declare the official start of the Olympics and to recite the truce.

776 B.C. marked the first official Olympics. Like today's Olympic Games, they were held every four years. The games' organizers added new events throughout the years and recruited more participants. What started as a one-day event grew to span five entire days. While some events took place in the stadium (a site that held more than 40,000 people), others were conducted in the Hippodrome, a large, leveled field. As the Olympics grew larger, gymnasiums were built for athletic practice and accommodations were constructed for the Hellanodikis -- judges. For the 12 centuries that the games were held, they changed locations four times, beginning in Olympia and ending in Nemea.

Next, we'll take a look at the events that made up the Olympic Games.

A Tale of Two City-States

The city-state that earned the prestigious post as host of the Olympic Games was granted temporary authority over the temple of Zeus. Hosts leveraged this control to gain political and economic clout, just like modern cities use the opportunity to earn revenue and honor. Elis and Pisa fought violently over this right in 364 B.C. Pisans gained the upper hand, and Eleans bitterly scoffed at any victories won that year [source: University of Pennsylvania].