What was the first cartoon made for existing toys? 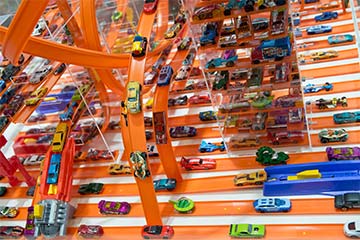 A Hot Wheels car racetrack is displayed at the 65th International Toy Fair in Nuremberg, Germany, in 2014.
© Daniel Karmann/dpa/Corbis

From 1969 to 1971, a 30-minute cartoon called "Hot Wheels" aired on ABC, the first cartoon made for an existing toy line. Often called a 30-minute commercial for the toy cars, "Hot Wheels" didn't just pop up out of nowhere. According to "The Guide to United States Popular Culture," it was the natural progression of a growing amount of advertising during kids' shows on Saturday and Sunday mornings.

The first commercial for a toy – Mattel's Burp Gun – aired in 1955, and toy ads exploded from there. Throughout the late 1950s and into the 1960s, 16 minutes of advertising per hour was common during the early morning weekend hours dedicated to children, while industry regulations allowed only 9.5 minutes max during prime time [source: Browne].

While Mattel made the argument that the show "Hot Wheels" didn't advertise the cars – it was about the cars – and, therefore not a commercial, just a happy coincidence -- the Federal Communications Commission (FCC) didn't see it that way. The FCC's focus on the show helped kill it after just two seasons.

That wasn't the end of program-length commercials (PLCs), however. It was just the beginning. The continued proliferation – anyone remember "Strawberry Shortcake"? – led to a 1974 FCC policy statement banning them. It was a position that lasted until 1984, when the FCC removed the rules limiting advertising during kids' shows to 10.5 minutes per hour on weekends and 12 minutes per hour on weekdays. Congress passed legislation to reinstate the rules, but in 1988 then-President Ronald Reagan vetoed the law, calling it an infringement on the Constitutional right of free speech.

The first toy-to-feature-length-cartoon was Raggedy Ann, when the doll appeared in the 1977 film "Raggedy Ann & Andy: A Musical Adventure"[source: Heitmueller]. Now, children's programming tied to toys – both toy-driven and toy-following – is a part of everyday life. It led to the phenomenally successful Transformers films, TV shows and toys, and even live-action, feature film tie-ins such as "Pirates of the Caribbean." And it can all be traced back to tiny little cars called Hot Wheels.

What does a dolly grip do?
So Long George Romero and Thanks for the Zombies
Why Are Popular TV Shows Splitting Seasons?