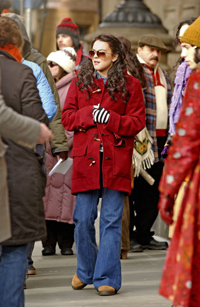 Film set construction planning begins months or even years before a film goes into production. It all starts with the script. The script includes descriptions of all sets and locations that will be used in the film. These descriptions can be very generalized or highly detailed, depending on the screenwriter.

Often the first person to see the script is the production designer, who uses the screenwriter's scene descriptions to give an accurate estimate on how much the completed film sets will cost. The production designer will also look for places in the script where computer-generated (CG) effects would be more affordable than building entire sets. Based on this information, movie producers can create a budget and look for funding.

Once a director is chosen for the film, he will meet with the production designer to talk about the best way to visually represent the locations in the script. The production designer will hire a location manager who will scout out interior and exterior locations for certain sets. The rest will need to be built from scratch on a studio soundstage or backlot.

Research is an important part of the early stages of set construction planning, particularly for films that takes place in the past or the future. Large film studios employ full-time researchers to dig up architectural drawings, archival photographs and artist renderings of historical buildings and locations. If a movie is set deep into the future, researchers may consult technology experts and futurists who can work with concept artists to sketch out 25th century skyscrapers and supersonic highways.

The production designer also works with the director and cinematographer to establish color palettes, textures, lighting and composition that help tell the story visually. If you paint a set with bright colors, for example, it implies a light, happy mood. Flat, gray colors create a lifeless, sterile atmosphere.

When sketches, drawings and models have been approved, they're handed to the art director. The art director oversees a team of draftsmen who act as the architects of the film sets. They use computer-aided drafting (CAD) software to create detailed, three-dimensional blueprints of the final structures.

In the planning stage, the art director needs to start ordering hard-to-find props like replica airplanes, hire sculptors and other specialty artists to create original works of art and contract with special effects houses to create digital matte paintings and other CG techniques to supplement the constructed set.

With the blueprints in hand, now it's time for the construction manager to start hiring all of the carpenters, painters, plasterers, riggers, model makers, scenic artists and stagehands who will physically build the film set. This is where artistic vision meets wood, nails and concrete. The goal is to bring the whole project in on time, under budget and in accordance with the specific vision of the director.

Now let's look specifically at the many different aspects of set design and set construction.