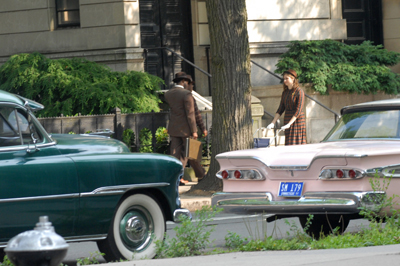 After the basic structure of a set is built, it needs to be dressed. The set dresser or set decorator is responsible for the furniture, wallpaper, carpet, appliances, the paintings hanging on the wall, the upright piano in the corner -- literally every object on the set. Set dressers need to have a talent for fashion and interior design, but also the ability to find objects that say something about a character and contribute to the story.

Prop masters are responsible for all the objects handled by the actors themselves or that interact with the actors. This can be everything from a whisk to a pistol to a peacock. On larger productions, the prop master might work with weapons masters or animal trainers who specialize in these areas. Some props are so essential to the character or story -- like the falcon in "The Maltese Falcon" or Indiana Jones' whip, that several versions of the prop are made or purchased as back ups.

Filmmaking is a business. Every film has a budget and the size of that budget dictates many of the most important decisions related to set construction. The production designer and the director have to figure out the best way to achieve their artistic goals with the money that's available.

A lower-budget film might re-create a turn-of-the-century Japanese village by shooting inside a re-purposed log cabin. A big budget movie, on the other hand, might build an entire village from the ground up complete with historically accurate architectural details, live oxen and a man-made river running through the center of town.

The budget also influences the amount of special effects that are used in a movie. In the newest "Star Wars" trilogy, for example, the production designer decided it would be cheaper -- and more visually powerful -- to build scale models of some alien worlds instead of creating them entirely with computers.

In the movie "The Last Samurai," on the other hand, the script includes a scene where the main character walks out of a bar and onto the streets of 19th-century San Francisco. The production designer knew it would be too expensive to build a large-scale replica of the historic San Francisco skyline, so he shot the scene with a green screen and filled in the background with a digital matte painting.

Now let's look at some of the specific job titles and responsibilities related to film set construction.