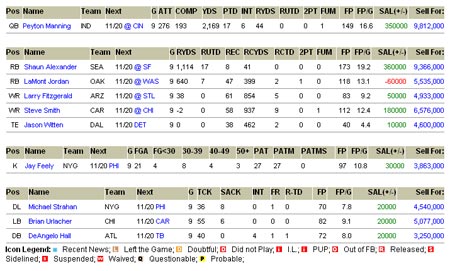 In a salary cap game, the fantasy player acts as a virtual owner with a virtual bank account to draft players whose weekly game performance translates into points. These points are awarded for categories such as touchdowns, rushing yards, field goals and sacks. Players' salaries rise and fall according to their weekly performance, and the goal of the virtual GM is to build the strongest lineup possible without exhausting his payroll or going over the number of allowed trades during a weekly period. Since more attention must be paid to variables such as injury, bye weeks, and opposing coverage, a successful salary cap team requires more maintenance and research than a pick 'em game.