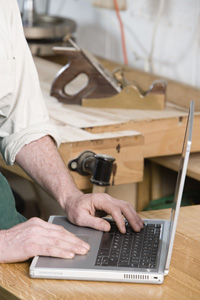 Matte painting has its roots in still photography. In the mid-19th century, photographers began using double-exposure techniques to composite two distinct images into one photograph. In the Victorian era, so-called spirit photography captured the imagination of the masses. In these photos, ghostly apparitions seemed to mingle with the living. They were, in reality, simple darkroom tricks, or what we now call special effects.

Film matte painting grew directly out of this special effects tradition. In 1905, a man named Norman Dawn was working as a still photographer in Los Angeles. He was disappointed when one of his shots came back partially blocked by a telephone pole. A colleague told Dawn to go take the picture again, but this time to bring along a piece of glass with an image of a tree painted on it. Hold the piece of glass between the camera and the building and use the fake tree to cover the pole. It was a simple old photographer's trick, but proved a convincing illusion [source: Cotta Vaz].

An aspiring filmmaker, Dawn soon developed a system for applying glass matte painting to the exciting new world of motion pictures. The Dawn Process or in-the-camera matte shot works like this: