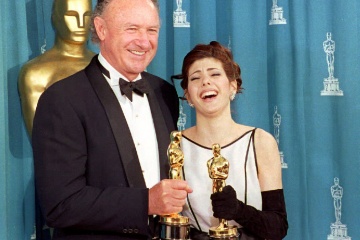 Actress Marisa Tomei is the go-to example of an Oscar going to the wrong person, but it's just a myth. The Oscars have built in checks to keep that sort of thing from happening.
SCOTT FLYNN/AFP/Getty Images

In 1993, relative unknown Marisa Tomei won the Best Supporting Actress Oscar for her role as Mona Lisa Vito in "My Cousin Vinny," pulling off a major shocker by besting veterans Joan Plowright, Vanessa Redgrave, Miranda Richardson and Judy Davis. There's been a pesky rumor floating around ever since that Tomei wasn't the real winner, that presenter Jack Palance said her name in error and the Academy of Motion Picture Arts and Sciences covered it up to avoid humiliation. So was this one of the biggest upsets in Academy Awards history or the biggest hoax?

It was pretty shocking that the 28-year-old Tomei, then best known for her role on "The Cosby Show" spinoff "A Different World," was even nominated for the Oscar. Academy members generally don't vote for comedic performances and her portrayal of a Brooklyn hairdresser with a surprising talent for car repair was over-the-top wacky. Tomei's fellow nominees -- all older British stage veterans -- were nominated for more traditionally Oscar-worthy films: the period dramas "Howards End" and "Enchanted April," Woody Allen's "Husbands and Wives" and the French thriller "Damage." Tomei definitely stuck out like a sore thumb.

So when Palance read Tomei's name from the envelope on March 29, 1993, people immediately started crying foul, claiming he had announced the wrong name. Perhaps the 74-year-old had been confused by the teleprompter, or maybe it was an ill-advised prank -- an extension of his infamous one-armed pushup stunt at the previous year's Oscar ceremony. In any case, it was apparently impossible that Tomei had actually garnered the most votes. The conspiracy charge was led by film critic Rex Reed, who told Geraldo Rivera in 1997 that Palance had probably been "drunk" or "stoned" when he proclaimed Tomei the winner.

The teleprompter claim sounds convincing at first. Tomei's name was last on the alphabetical list of nominees that Palance read off the screen, so perhaps he got mixed up and said her name again as the winner. But it turns out the winner's name is the only one in the envelope -- it's not on the screen -- so that theory doesn't really hold water.

And if Palance had somehow mistakenly blurted out Tomei's name after opening the envelope, he would have had the accountants to deal with. Everyone always chuckles at the point in the ceremony when the PricewaterhouseCoopers employees are trotted out for an introduction, but they're waiting off-stage for a reason. If a presenter makes a mistake, the representative will come out and make an immediate correction. Sure, it'd be pretty embarrassing for everyone involved, but there's just no way that an Oscar would go to the wrong person.

Roger Ebert, angered by the allegations, got the Academy to issue an official denial of the claim. And Tomei has more than proven herself as a dramatic actress since. Se's been nominated twice more for Actress in a Supporting Role (for "In the Bedroom" in 2001 and "The Wrestler" in 2008). But the "accidental Oscar" rumor is still out there. It's one of those Hollywood stories that just won't die.