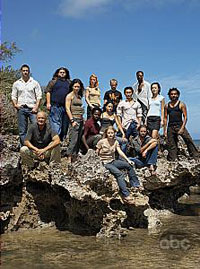 Survivors of a crash, or subjects of an experiment?
Photo copyright © 2004 ABC, Inc. / Mario Perez

Entertainment Weekly writer Doc Jensen theorizes that a dead psychic haunts the island. Hanso Foundation scientists were definitely studying a psychic phenomenon known as remote viewing. Scientists may be observing the island from elsewhere or even affecting events with their minds. What supports this theory?

Blinding Us with Science

The events on the island might be pretty straightforward. The DHARMA Initiative could be scientists who really study what they claim to. Their experiments could include:

DHARMA and Jalad at Tanagra Numerous books and records appear among the possessions of the Flight 815 survivors and in Station 3. Many people theorize that these are clues about what is happening. They point out that "Watership Down" is about rabbits searching for a new home, and "A Wrinkle in Time" discusses time travel and travel across dimensions. However, both books have more sinister themes. "Watership Down" describes a warren where rabbits are being fattened up to be killed. "A Wrinkle in Time" includes a struggle against evil and a being called IT that controls people's lives down to the smallest detail.

Other possibly important books include: "Occurrence at Owl Creek Bridge, ""The Brothers Karamazov,""Green Lantern/Flash: Faster Friends Part 1, " "Rainbow Six, ""The Turn of the Screw," "The Third Policeman" and "Are You There, God? It's Me, Margaret."

Out of the Matrix: Mind Games

It's unlikely that all of the events on the island are taking place in one person's mind. But the memories of the Flight 815 crash survivors may not be reliable. The frequent appearances in one another's memories may indicate tampering rather than coincidence or predestination. They may be artificial memories that have been uploaded into the survivors' minds. After all, how likely is it, really, that Kate, Locke and Michael all had accidents involving the same gold car?

In addition, many of the Flight 815 survivors have seen people and objects in the jungle that should not -– or could not -– be there. This may be the result of a collective hallucination, mind control or other tampering with survivors' perception.

For lots more information about the DHARMA Initiative, "Lost" and other related topics, check out the links below.

The "powers that be" behind the island are reluctant to disclose much about what's happening. They have taken the time to discredit a few theories, including: