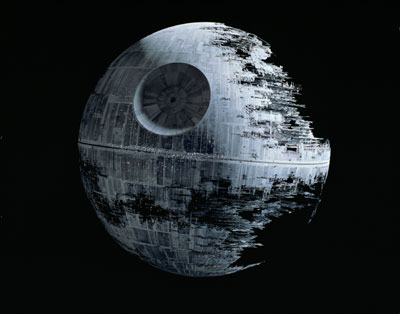 After the destruction of the first Death Star, the Empire immediately began building a second Death Star. Death Star II was placed under the command of Moff Jerjerrod and was a larger (160 km/99.5 miles in diameter) more powerful version of its predecessor.

Many of the design flaws of the first Death Star were corrected in Death Star II, including its Achilles heel -- the thermal exhaust ports. Instead of relying on several large vent ports that led directly to the station's main reactor, Death Star II was designed with network of variably angled millimeter-wide heat dispersion ducts. This design made it impossible for a projectile to reach the reactor via the vent system.

Another costly oversight was corrected in the layout of the new stations defenses. The original Death Star was only designed to repel an attack from large capital ships. Because of "loose" net cast to catch attackers, Rebel fighters were able to easily penetrate the Death Star's defense grid. The design of Death Star II almost doubled its surface defenses and triangulated them so that both capitol ships and fighters could easily be gunned down.

Death Star II was designed with:

The Death Star II also featured a larger and more powerful Superlaser that was capable of firing more frequently and more accurately.

"What happens when you detonate a spherical metal honeycomb...just above the atmosphere of a habitable world? Regardless of specifics, the world won't remain habitable for long." Read this interesting and thorough analysis of what happened to Endor after the destruction of Death Star II by Dr. Curtis Saxton.