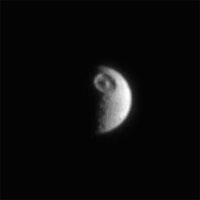 The hypermatter reactor is the heart of the Death Star. The Death Star's hypermatter core is based largely on early Sienar Systems hypermatter implosion core that was the power source of the Confederacy of Independent Systems' Great Weapon (the early inspiration for the Death Star -- more on this later). Little is actually known about the details of the highly classified reactor design, but we do know that it is a massive fusion reactor fed by stellar fuel bottles that line the periphery of the main reactor chamber.

The Death Star's real-space propulsion system is made up of a network of ion engines that use converters to transform reactor power into thrust. The engine thrusters are primarily lined along the equator of the station.

On July 3, 2004, soon after orbital insertion around Saturn, the unmanned spacecraft Cassini sent this disturbing image back to Earth.

While many believed this to be proof of the existence of a new Death Star in our very own solar system, it turns out that's no space station. This is a picture of Mimas. Mimas is one of the 31 moons of Saturn. It's 247 miles across (398 kilometers) and sports a huge crater named Herschel that is 80 miles wide (130 kilometers). This picture was taken by the Cassini spacecraft from about a million miles (1.7 million kilometers) away!