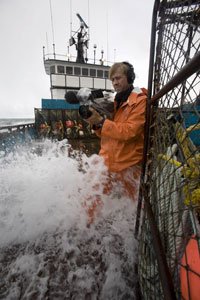 Pulling off a show like "Deadliest Catch" is no pleasure cruise. The entire film crew usually arrives about a week before fishing season begins, most times even beating the boats to Dutch Harbor. During this time, the camera crew does any lead prep that it can -- checking and rigging cameras, taking inventory of tape stock and making sure everyone is up to speed on safety training and gear. The boats have at least four remote cameras attached to various parts of the vessel, so when they arrive, it's a mad scramble to get onboard and start rigging. Each two-man camera/producer team is responsible for its own footage, so a friendly competition has evolved around who can dream up the most extreme camera rig and snag the best shots.

Contrary to what some viewers think, the camera crew doesn't jump into in a water taxi at the end of every day and get shuttled back to a warm hotel room. The camera crew lives on the boat for the entire crab run, usually from three to five weeks. Quarters on these boats are tight, so the captains don't allow more than two film crew members onboard. Because of this, there's no soundman -- meaning all audio is captured with camera microphonesand small mics attached to each deckhand. There are also boats and helicopters that capture footage outside of the fishing boats.

Aside from being skilled cameramen, the crew for "Deadliest Catch" must also be tough as nails, personable enough to get along with the boat crew and able to repair camera gear on the fly. One adventurous cameraman even stepped up and filled in as a deckhand after a greenhorn quit working. The show uses about 50 Sony HDV cameras per season, and most of these are lost or inoperable by the end of the run. Saltwater and ice are not good for high-definition cameras and tiny viewing screens. Only cameras with LCD viewing screens are used because of safety issues -- it's tough to stay aware of your surroundings if you're constantly looking through a small viewfinder.

The camera teams weatherproof the cameras as best as they can, but refrain from using underwater camera housings because of the weight and bulk they bring. Camera teams report back to headquarters at Dutch Harbor each day by satellite phone. The show's producers keep track of storylines and suggest footage ideas that help flesh out the stories. If a greenhorn on the Time Bandit is floundering and another on the Northwestern is doing great, the producers have a storyline. The land crew also helps to organize the footage for the exhausted camera team who often don't even know what day it is, much less what they've been shooting.

One thing that sets "Deadliest Catch" apart from other reality TV shows is that the camera teams get interviews and reactions in the moment. Most reality shows tape interviews after the show has finished principal photography. The show's producers believe that this brings immediacy and a genuine reality that's missing from most other shows in the genre.

There's nothing you can do; that camera is toast. So bury it at sea and click forward to read more about the show's production and how much money these fearless seamen reel in.

Thanks go to Ryan McNeil for his assistance with this article. McNeil worked as an associate producer on seasons two and three of "Deadliest Catch" and is currently a director for General Assembly Pictures. Viva Ryan.