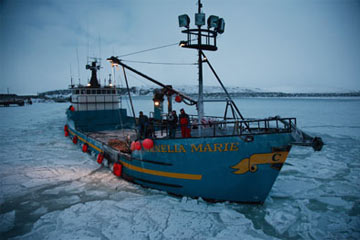 In 2011, the Discovery Channel will begin airing the seventh season of "Deadliest Catch." The following boats and captains will be featured:

F/V Cornelia Marie: Captain Phil Harris (deceased) -- Harris brought 30 years of fishing experience to the captain's chair of the 128-foot (39-meter) boat that's been featured in all seven seasons of the show. On the job he worked with his two sons, Josh and Jake, as deckhands. Harris was the co-owner of the Cornelia Marie for more than 17 years and was a tough, grizzled veteran of the sea. He lived in Seattle in the off-season and enjoyed riding his Harley and building custom-made birdhouses. Sadly, Captain Phil passed away after suffering a stroke during filming of the show's sixth season. Co-ownership of the Cornelia Marie now falls to Josh and Jake Harris, and Captain Derrick Ray is the vessel's new helmsman.

F/V Northwestern: Captain Sig Hansen -- The Northwestern is owned by the Hansen family. Sig is the captain, and his brothers Edgar and Norman work as deck boss and deckhand, respectively. The Northwestern has grown in size over the years to accommodate the increased loads boats are allowed. It was originally 108 feet long (32 meters) with a 156-pot capacity, but now sits at 125 feet (38 meters), and can carry the maximum 250-pot load. The Northwestern has also been in all seven seasons of "Deadliest Catch."

F/V Time Bandit: Captains Andy and Johnathan Hillstrand -- The brothers Hillstrand are arguably the liveliest and funniest captains on "Deadliest Catch." They split duties over the two crab seasons -- John takes the helm for king crab; Andy handles opilio. Brother Neal works aboard the Time Bandit as engineer, cook and relief captain. John's son Scott also works onboard as a deckhand. The boat was custom-built by the brothers from their father's design and boasts some amenities not often found on crab boats -- queen-sized beds, staterooms and a sauna. The Time Bandit has been featured all seven seasons.

F/V Wizard: Captain Keith Colburn -- The Wizard didn't start out as a fishing vessel. She was originally a U.S. Navy ship in World War II but was converted to a crab fishing boat in 1978. Colburn started as a deckhand in 1988 and worked his way up to captain in six short years. In 2005, he was able to buy the Wizard from its owners. Colburn works alongside his brother Monte, who serves as deckhand and relief skipper. The Wizard has appeared on "Deadliest Catch" since season three.

F/V Ramblin' Rose: Captain Elliot Neese -- This newcomer to the fleet is helmed by a 28-year-old captain and manned by an equally youthful crew. Make no mistake -- the crew has packed a lot of experience into their years. Registered in Juneau, Alaska, the Ramblin' Rose is 108 feet long (32 meters) and has 960 horsepower. Time will tell if the boat's success will ever eclipse its reputation as a floating party.

F/V Seabrooke: Captain Scott Campbell Jr. -- Another fleet newbie with youth at the wheel, the Seabrooke is out to prove itself. The boat is 109 feet long (33 meters) and 30 feet wide (9 meters). Captain "Junior" may seem overconfident for his 36 years, but he enters the crabbing season troubled over the loss of a deckhand at sea.

Drop those pots in a honey hole and click forward to learn how these men go about catching crabs.