The Eyes and the Base 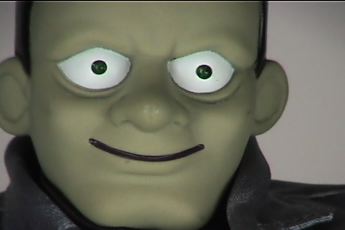 While the motor and gears are making the monster dance, two green LEDs make his eyes light up. (Figure 9) The LEDs are connected to the circuit board in the base that controls everything. Pulses of current are sent to the LEDs to turn them on briefly. This makes them flicker in time to the music.

The base of the monster (Figure 10) holds the circuit board. (Figure 11) The circuit board contains a tiny integrated chip (IC) that is the brains of the monster. This chip has the song encoded in it and synchronizes the movement of the motor to the music. It does this by alternating the flow of current to the electric motor so that the motor spins in one direction and then reverses and spins in the other direction.

Five pairs of wires run from the circuit board to all of the other components. They are:

This small speaker in the base reproduces the music sent to it by the integrated chip.

For lots more information about the inside of a dancing monster, check out the links below.