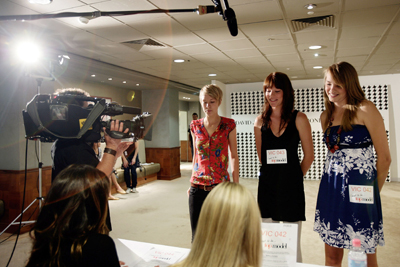 Those are the types of problems that casting directors face, along with meeting the needs of the studio, writer and director. For example, writer-director Nancy Meyers wrote "The Holiday" (2006) as a romantic comedy with four specific stars in mind -- Cameron Diaz, Kate Winslet, Jack Black and Hugh Grant.

Diaz liked the script but had already decided to take a year off. Winslet didn't want to come to Hollywood to film while her children were in school in England. Black had a scheduling conflict, and Grant refused to take a role so similar to others he had played. Without these four stars, the movie's future became uncertain.

By the time the casting directors started working, Diaz had agreed to play the part. They went searching first for the other female lead, who needed to be British, beautiful, funny and of star quality. Maggie Gyllenhaal read well but wasn't British. Minnie Driver was British, but Meyers didn't see her in the part, and so on. Several months later, Winslet said she was now available, and luckily the shooting schedule change worked for Black, who also signed on.

That left the casting directors hunting for a charming, funny, handsome Hugh Grant replacement. They brought in Colin Farrell, Ewan McGregor, Clive Owen, Daniel Craig, Robert Downey Jr., Brendan Fraser and at least 20 more actors to read. Then, with time running out before the scheduled start of production, Meyers decided Jude Law was the best choice. With the stars set, the movie was a go [sources: Hirschenson and Jenkins].

Casting the right stars definitely can save a movie. But what else do casting directors do? And what skills do you need to become one? Let's look first at the responsibilities of a cast director.