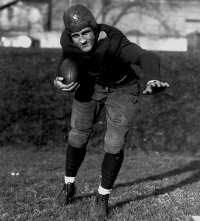 Bronko Nagurski returned to pro football for a final season  as a tackle six years after  he first retired. See more pictures of football players.

Bronko Nagurski took a handoff, blasted through the opposition, crossed the goal line, and ran clear through the end zone and into a brick wall. "That last guy hit me awfully hard," he admitted later.

A charter member of the Pro Football Hall of Fame, Nagurski (1908-1990) symbolized power running to fans during the 1930s, and many eyewitnesses still insist that for sheer brutal line-smashing, the great Chicago Bears fullback has never been matched.

Never fancy, he didn't dance, jiggle, or juke; he just plowed straight ahead -- right through people. His style was the stuff of legends. When one coach was asked how he planned to stop Nagurski, he shrugged: "With a shotgun as he's leaving the locker room."

More than a great runner, Bronko was a complete player. At the University of Minnesota, he played four positions and was named an All-American at both fullback and tackle.

With the Bears, his line-backing was as fearsome as his line-bucking. His blocking might have made him All-Pro had he never even carried the ball.

His jump-pass off a fake line plunge was devastating. It went for the key touchdown in the Bears' 1932 victory over Portsmouth for the league championship.

The next year, in the NFL's first official championship game, Bronko passed for two touchdowns, including the one that scored the game-winning points.

When he couldn't get a raise to $6,500 in 1938, Nagurski retired to become a professional wrestler. But in 1943, when war demands left the Bears short on manpower, he rejoined the team as a tackle.

Late in the season, with Chicago trailing in a must-win game, he went back to fullback. Again and again, the 35-year-old Bronko tore into the line. His mighty plunges keyed a drive to the tying touchdown and then set up the winning score.

A week later, he scored a touchdown to help the Bears win the championship game. Then he retired for good.