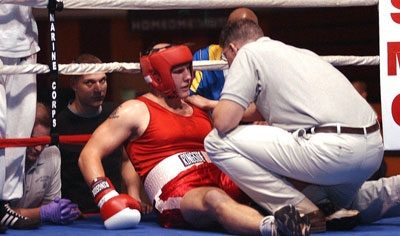 Photo Courtesy of the U.S. Marines
If there isn't a knock out, judges will award points based on scoring punches. The boxer with the most points at the end, wins.

A boxer's goal is to knock his opponent down, stunning him so severely that he can not regain his feet before the referee counts to ten. This is called a knockout (KO), and results in a victory for the boxer still standing. When a boxer knocks his opponent down, he must retreat to a neutral corner, i.e., not one of the corners where the boxers' trainers wait to assist them between rounds.

If the knocked-down boxer can stand quickly enough, the referee (the only person allowed in the ring other than the boxers) makes sure he's OK and able to defend himself, and the fight goes on. Sometimes the rules call for a mandatory eight count. That is, even if the boxer jumps to his feet immediately, the referee makes him wait until he's counted to eight to rejoin the fight. In some rules systems, if a boxer is knocked down three times in one fight, the result is a technical knockout (TKO). This is usually recorded as a KO on the winning boxer's record. A TKO may also occur when the referee, a ringside doctor, a boxer's trainer or the boxer himself decides that he is too injured to carry on with the fight.

Some rules allow a knocked-down boxer to be "saved by the bell." If the round ends while he is down, but before the referee finished his ten count, the boxer can return to his corner and get the one-minute rest period. Other rules systems do not allow this -- the ten count continues even after the round ends.

Often, a match will end without either fighter being KOed. In this case, the winner of the match will be determined by judges, and the result is known as a decision. Professional matches use three judges (or sometimes two judges plus the referee). Olympic boxing uses five judges. There are variations in scoring systems, as well, but they all boil down to this: the judges watch each round and determine which boxer won that round. They assign points to each boxer for winning a round. The points for all the judges are tallied at the end of the match, and the boxer with the most points (or rounds) is declared the winner.

In the next section, we'll take a look at the boxing scoring system.