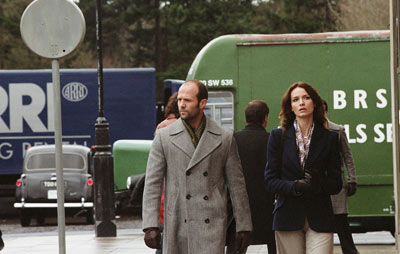 What will happen now that the scandalous story of "The Bank Job" has been brought out into the open again?
Jack English/Lionsgate

What will happen now that "The Bank Job" is refocusing attention on a hushed-up 37-year-old story? "We made the film under the radar, but now that the film is coming out, both the royal family and the [government] are put in an interesting place, whether they want to talk about it or not," says producer Charles Roven, but he's not alone in the belief that the movie will get tongues wagging -- and hopefully, rear ends in theater seats.

"People love stories about criminals," observes star Jason Statham. "I would never take those chances myself, so I wonder what makes these people tick, how their brains work."

"I think there's a certain amount of vicarious pleasure that we get from watching other people do things that we wouldn't dare do ourselves," Donaldson says. "I think heist movies work because there's a sustained tension to them. There's the planning part of it, the robbery itself, when there's even more tension, and then you have the aftermath. It's intriguing."

And, unlike contemporary capers like "The Italian Job" or the "Ocean's" trilogy, the period element of "The Bank Job" makes it especially appealing, says writer Ian La Frenais. "It seems so old-fashioned, those days of tunneling through and robbing a bank. No one would think about doing that today. You'd just get yourself a BlackBerry and a Rottweiler and become a drug dealer."

To learn more about "The Bank Job" and other movies, take a look at the links below.