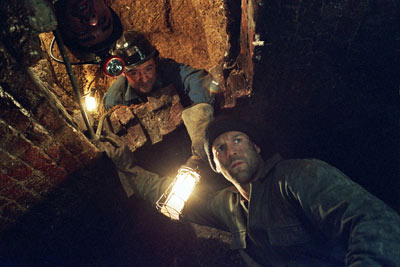 In 1971, a group of thieves broke into the safe deposit boxes at Lloyds Bank on Baker Street in London and stole more than 500,000 British pounds in cash and jewelry. Four of the thieves were caught, but the rest disappeared with the loot. The audacious heist -- and the accompanying scandal involving murder, corruption, blackmail and royal-family sex photos -- immediately captured the fascination of Great Britain. But three days later, all news coverage stopped because of a government gag order. It's obviously a perfect setup for a movie, but how do you create a script when there's so little information out there -- and so many of the major players are still on the lam?

Writers Dick Clement and Ian La Frenais ("The Commitments," "Flushed Away," "Across the Universe") found a way. They did their best to fill in the blanks, using secondhand accounts, media coverage -- what there was of it -- and transcripts of the thieves' walkie-talkie conversations to put together a script based as closely as possible on fact.

The result is "The Bank Job," directed by Roger Donaldson ("No Way Out," "Thirteen Days," "The Word's Fastest Indian") and starring Jason Statham ("The Italian Job," "Crank," "Transporter"). In this article, we'll sort fact from fiction, explain how the heist was planned and executed, and outline the challenges the production faced in shooting and re-creating the look of the '70s.

Thieves stole $28 million worth of diamonds from the ABN Amro Bank in the heart of the Diamond Quarter in Antwerp, Belgium. Antwerp is known as Europe's diamond capital because more than half of the world's diamonds pass through this district.

A Kentucky man entered a liquor store with his head covered in duct tape and unsuccessfully attempted to rob it. Learn about how robberies (sometimes don't) work in this news video from Reuters.