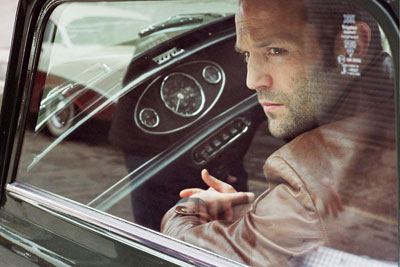 The filmmakers briefly considered shooting "The Bank Job" in Melbourne, Australia, but eventually decided to return to the scene of the crime. London did, however, pose quite a few challenges. "[It's] a very noisy, difficult city to film in," says director Roger Donaldson. "The city itself is so tight and the roads are so narrow, even getting across the city is a two-hour exercise ... You just do the best you can."

The production couldn't shoot inside the actual Lloyds Bank, but they did use the thieves' lookout across the street. "The tops of the buildings are still the same -- with a little digital help," says Donaldson. Lights and other contemporary additions were removed in post-production.

The crew re-created the bank at various studios and locations around London. But Donaldson says the heist sequences were nothing compared to filming at Paddington train station, to which the production brought in a '70s-era locomotive.

"Convincing [officials] to allow us to shoot there was a big deal," he says. "So we had a lot of pressure on us to do things very quickly and be organized and make it happen. There was no light, there so there were a lot of technical issues. We weren't even sure we were going to pull it off."

Weather was a constant issue. "We shot the film in the middle of winter, so it can get pretty gloomy in London," notes Donaldson. "It gave the movie that gray, London look, which was appropriate."

The filmmakers did want the settings, cars, wardrobe, hair and makeup to be authentic to the period, but a light touch was applied to the overall '70s look -- in other words, no "Austin Powers" outlandishness.

"We wanted to make it feel contemporary," explains producer Charles Roven. "If you look at the way people are dressed, it's understated. It's true to the period, but you could go out in it today."

The production also faced logistical and financial obstacles, but the film was finished on schedule and on budget for "a modest eight figures," says Roven.