Layout of an Avid Editing Console 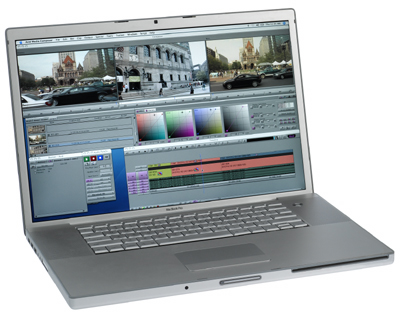 The heart of an Avid non-linear editing system is the Media Composer software. The software provides the user interface through which an editor accesses the tools and system functionality. The Media Composer interface is broken down into three basic areas: the bin, the monitor and the timeline. This three-part system has been adopted by pretty much every other video editing software out there, from high-end products like Final Cut Pro to amateur software like Apple iMovie.

The bin is where the editor stores all the different project components. It not only holds digitized video clips, but digital audio files, images and any other source material that'll be assembled into the final project. In the bin monitor, the editor can adjust the properties of each individual component, trimming the length of clips, adding effects, smoothing jittery video and adjusting audio levels.

The monitor is actually composed of two small screens. The left screen shows a single source video clip and the right screen shows the full project video. This split-screen view is useful for trimming an individual clip before adding it to the project timeline. Once the clip has been added, the editor can preview how it looks with the rest of the project in the right-hand screen.

The timeline area is organized by video and audio tracks. The process is similar to audio editing with a multi-track digital audio workstation. An editor can lay down separate video tracks for credits and subtitles, animated graphics and special transitions. Then he can create multiple audio tracks for dialogue, music and sound effects. The timeline runs chronologically from left to right. In the timeline, the editor can select chunks of video or audio (across multiple tracks if he wants) and cut, copy or delete them with a click of the mouse.

For the home user, or a professional filmmaker on a tight budget, it's possible to run a perfectly good Avid system with nothing more than the Media Composer software and a powerful desktop PC or laptop. But Avid consoles for professional TV and film production typically include additional Avid hardware and equipment.

Avid hardware's role is to make the Media Composer software run faster and for the whole system to run more efficiently. The hardware box (smaller than a standard desktop PC tower) works like an external video card, helping speed up the digitizing process and the rendering process (for creating visual effects and transitions). The more expensive versions of the Avid hardware allow an editor to use both standard definition (SD) and high definition (HD) video sources in the same project.

The hardware box also includes dozens of useful input and output connections for external digital and analog equipment, both audio and video. In this way, the hardware box serves as a hub between the host computer and external media sources like video cameras, tape decks, memory card readers and DVD drives. The hardware not only imports media from these sources, but can export finished video projects back onto tape, DVD, memory card or any digital file format.

A typical Avid editing suite has at least two computer monitors, one which focuses on the bin and another which shows the monitor and timeline. Professional Avid Editors also use a special keyboard that's color-coded to highlight the short-cut keys. There's also usually a video playback screen -- sometimes a large LCD display -- and plenty of high-capacity external hard drives to hold those large video files.

Now let's look at some of the latest developments with Avid hardware and software and how they're changing the way that editors do their job.