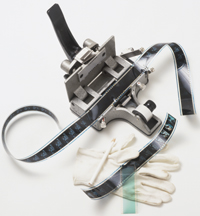 Linear editing means that a project is edited and assembled in a linear fashion -- from start to finish. Linear editing is most common when working with videotape. Videotape, unlike film, can't be physically cut into pieces and spliced together in a new order. Instead, the editor must dub or record each desired video clip onto a master tape.

Let's say you have three source tapes, labeled A, B and C. In linear editing, the editor decides which source material he wants to use first, second and third. In this case, he wants to use material from tape C first, then B and A. He starts by cuing up tape C to the beginning of the clip he wants to use. Then he plays tape C while simultaneously recording the clip onto a master tape. When the desired clip from tape C is done, he stops recording. Then he has to do the same thing for the clips on tapes B and A.

Interestingly, traditional film editing was always non-linear. A filmmaker could cut his film up into pieces and splice it together in any order he liked. However, this cut-and-splice process was painstakingly slow, greatly limited in transitions and effects and left a lot of room for error.

Modern non-linear editing is entirely digital. Video or film source material is digitized into media files that can be stored on a hard drive. Using video editing software like the Avid Media Composer -- or similar products like Final Cut Pro and Adobe Premiere -- the source files can be organized into clips that are pasted onto a timeline. Using the timeline, an editor can trim clips down to single frames, add transitions, add and edit audio, add effects, and then export the movie back to tape, DVD, film or the Web.

The main advantage of editing with a non-linear system like Avid is speed and flexibility. The director can change his mind a hundred times and the editor has the power to make those changes in real time without having to start all over again. In linear editing, if you decided to replace a clip with a new one, you'd have to overdub onto the existing clip and hope both clips are the same exact length. If the new clip is too short, you'll leave the tail end of the old clip on the master. If it's too long, you'll roll into the next scene. Meanwhile, all that overdubbing degrades the image quality.

Avid has long been considered the industry standard for professional digital video editing. Read on to learn more about the different components of an Avid system and how they work together to make the editing process not only faster, but also more creative.