Away Put Your Lawsuit! I Mean You No Harm. 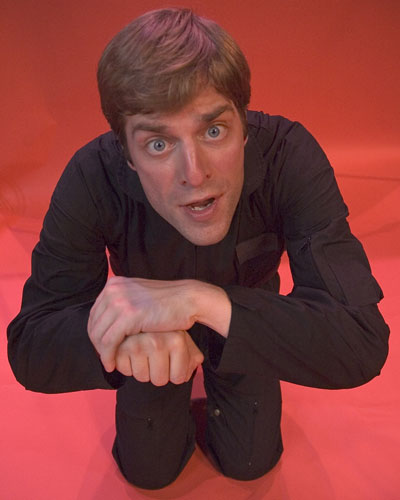 Charles Ross's show has gone from a piece performed mostly at fringe festivals to a touring show with sold-out crowds and television appearances. He's been on NBC's "Late Night with Conan O'Brien" and CBS's "Late Late Show." Sir Ian McKellen attended one of his performances of "One Man 'Lord of the Rings'" and wrote about it in his blog, and Ross performed the show for Vin Diesel and the rest of the cast on the set of "The Chronicles of Riddick."

Ross has also performed the show at large gatherings of "Star Wars" fans. He was the emcee and entertainer at the Third Annual "Star Wars" Fan Film Awards at Comic-Con in 2004. He also performed "One Man 'Star Wars' Trilogy" at Celebration III, an enormous, official party for fans before the release of "Revenge of the Sith" in 2005. "That was extremely rewarding in so many ways. That, honestly for me, has been the best experience with this show that I have ever had. And not to take away from all the other shows I've had. It was just from a sheer size, 3,500 people...They are just fantastic."

It may seem odd that a one-man satire could end up being performed at an official event. Ross suspected initially that Lucasfilm might someday shut his show down. But instead of a cease and desist order, Ross received a license from Lucasfilm to perform the show. "If anybody was ever to try to do something like I've done here, I would highly recommend that you go to the source, the company, the person that owns the right to it, first of all. I didn't think this show would be...as successful as it is. And out of success breeds the necessity for things like a license."

So far, Ross's idea of taking control of a career with one-man shows has worked -- he makes his living performing the show. "It all comes down to how much do you really need to get by? What kind of stuff do you have to pay off? What kind of stuff do you own? There was a time when I was nothing but in the red, and I've been in the black for five years now. And it's not just due to the Star Wars show, it's just due to I think an attitude...don't take on any more than you can handle, even if it means you're still taking on a lot."

Ross plans to keep touring with his show "until people get bored or I grow too old and feeble." At that point, he might seek permission to distribute the show on DVD. He'd need additional permission from Lucasfilm to do it.

Check out the links below for more information.

Theater critics don't always appreciate "One Man 'Star Wars' Trilogy," and sometimes they go so far as to criticize the audience as well. But fans of the films tend to enjoy themselves. "If I come to a town where people are just theater-goers and they're not really 'Star Wars' fans, they'll come and see it for its theatrical aspects," Ross says. "But are they going to get it the same way that a 'Star Wars' lover would? Probably not. But it is made for 'Star Wars' fans."