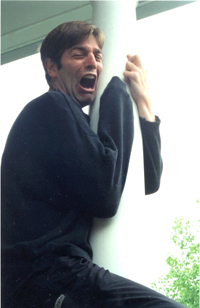 Charles Ross performed the "One Man 'Star Wars' Trilogy" for the first time in Toronto, Ontario in January 2001. Since then, he has spent a lot of time touring, mainly in the United States and Canada. Ross has refined the show a little in that time and added a few lines to take advantage of events in the original trilogy that are explained more fully in "Revenge of the Sith."

The show is immensely portable, but touring with it takes a lot of work. In the theaters, Ross works with technical staff to light the stage and test the sound. But he also spends a lot of time outside the theater, doing interviews to publicize the show. On the day he visited our office, Ross woke well before dawn for a radio interview. He'd performed the show the night before, and he had another show to perform that evening, plus other interviews during the day.

Performances are fun, but "if the audience is not getting it, it does very quickly become work. Whereas if the audience is getting it, there's just nothing like it." Even when they run smoothly, the shows themselves require a lot of physical effort. To stay healthy while performing, "You don't smoke, you don't drink...you've got to watch what you eat, which is kind of weird. I know my calorie intake

is very different when I'm doing the show and when I'm not."(Ross runs, dives, jumps and pauses throughout the show, much like a person does while playing baseball. Using that comparison and adding the energy used for speaking and singing, we estimate that he burns a minimum of 400 calories during the show.)

After the show is over, Ross usually goes back to his hotel room to recover. After the show, Ross rests and calls his girlfriend:

For me, that links me back to what my life actually is. And in a way it's almost like having two lives. There's the life where you're off on your own touring around doing the show and trying to sustain your pep and your spirit...It's kind of a weird mix between trying to keep positive and keep out there and keep doing the show when so much in your heart you just want to be home. You almost want to have a normal life. So, it's a strange dichotomy.

Sometimes, his girlfriend is able to tour with him, "and that's fantastic, because that's a wonderfully grounding thing. I mean, she for me is my home."

But even though it's caused some homesickness, touring has also allowed Ross to have some pretty amazing experiences.

From Han and Leia to Darcy and Elizabeth

"I think there are certain fan bases out there that would be amazing to try to tap into," says Ross. "I don't mean tap into [in] a money sense, but to be able to find out they're there by doing something like the 'One Man "A&E's Pride and Prejudice"' or something like that. Because I love that, that whole series is fantastic, but would it work? I have no idea."