A Trilogy at Point Five Past Light Speed 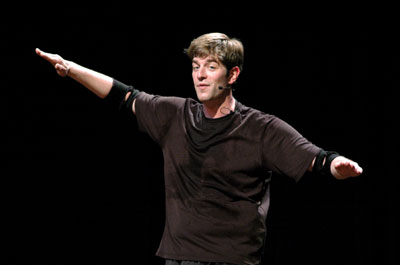 The one-man show has no props, sets or costumes.
Photo courtesy PKF Productions

Once you start down that path, forever will it dominate your destiny. If you start with that kind of thing, costumes and sets, it just opens up a whole new world of hurt. And frankly, this show is just extremely portable, in that I don't need a costume, other than I wear black clothes. And I do have a microphone...if it's a big auditorium, it needs to have some sort of amplification. But aside from that, nothing. Just me. And it's great because this show is made to tour.

In addition, one of his goals was to keep everything simple. "Why would you encumber yourself with something that you have to ship around when you're doing a show that's all about paring it down and really just humanizing the whole experience?"

The result is a fast-paced, 58-minute "long-form impression" of "Star Wars," "The Empire Strikes Back" and "Return of the Jedi." Dressed all in black and wearing knee and elbow pads, Ross is on the move from the beginning of the show to the end. He pauses for only a few seconds between each of the three films to get a sip of water. He imitates all of the characters, the score and even the opening crawl of yellow text using facial expressions, vocal impersonations, gestures and movements. It's strenuous -- Ross runs, jumps, leaps and rolls from beginning to end. When the show is over, he's sweaty and exhausted. After a performance in Stone Mountain, Georgia, he said to the audience, "My blood sugar's always a little low [after the show]. It's like I've had a stroke. A stroke of dorkiness."

His impressions of some characters rely more on his hands than his voice. He cups his hands over his ears to represent Leia's earmuff hairstyle, and he puts his hands over his eyes, palms facing out, to suggest Admiral Ackbar's distinctive eyes. To recreate Nein Numb's jowly look, he pulls at his cheeks. Others impressions, like Chewbacca and R2-D2, sound eerily like their film counterparts. "It's kind of a live form of 'Mystery Science Theater 3000,' or something like that, minus the film itself."

Although the show has a set script and choreography, Ross does make some adjustments depending on the audience. "It calls on different things you develop when you're an actor. Sometimes you develop a bag of tricks, as they call it, so while you're in front of a live audience, when certain things happen or certain things don't happen, you know how to adjust what you're doing to compensate for it, to draw people in. If it's a group of kids, it's going to be different than a group of seniors."

He also has fun with the audience, taking advantage of opportunities that present themselves during the course of the show. "If somebody's cell phone goes off or they get up to go to the washroom at the wrong time, I react to it. It also helps...that I've been doing the show for long enough to be able to deal with stimuli other than the stimuli that should be there. It actually kind of makes it fun for me, and that's the only way I think I've been able to continue doing the show for as long as I have." For example, at the same Stone Mountain performance, a train passed by the theater just as R2-D2 and C-3PO reached Jabba's palace. Ross quipped, "We could have taken the train."

It's a quirky show that simultaneously pays homage to and satirizes the trilogy, particularly its more memorable moments:

Some people love ["Star Wars"] in the way that you love a parent that maybe annoys you. It springs from a place of love, and so you make fun of them for the way they put things all the time or the way they always get on your case...but it's part of what you love. So that's, I think, part of the point where we can laugh, because we love it, but because it annoys us or we've always thought about it before. It's like observational humor, but instead of making an observation, you're accentuating what's already there.

Even though the show itself is playful and Ross has fun while performing, touring with the show is work. Next we'll take a look at what happens on tour.

Thoughts on the Emperor

When asked about his favorite moments in the show, Ross talked about the Emperor's role in the trilogy: "To me, [the Emperor] is the perfect introduction. We have a little introduction of him in Empire, and you hear about him in [A New Hope], so it's kind of like the rule about having a gun on stage. If you see a gun onstage, it's going to be used in the show at some point. And if you consider Star Wars not as three separate films but as one piece of work, you hear about the Emperor, you see him for the first time, and then he arrives. So, it's like the gun. You see it, you hear about it again, and then finally it comes out…He's a devastating character."