Always Two There Are...A Director and an Actor 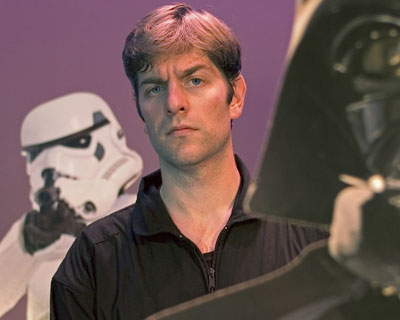 Charles Ross decided to create a one-man show in part because he hoped to find autonomy and success an actor. "As an actor, if people know who you are, then you're a successful actor. You don't have to explain to people who you are or what you do. So I guess I was in the position of working as an actor but not really making any gains [in terms of success]. And I didn't want to...jump into television or film because I think you can kind of get lost in that." A one-man show would give Ross independence and control over the direction of his career. "Making a one-person show was about creating my own work, creating my own niche."

But writing the show wasn't as simple as arbitrarily cutting 321 minutes of material out of the original trilogy. Ross and T.J. Dawe had to work together to create a show that was short, funny and understandable. One person had to be able to perform it alone, without the aid of props, sets or costumes. "The actual feat of doing it is akin to what a child would do when they're playing, if they're acting out 'Star Wars.' You want to tell the story, you want to tell your favorite parts, but you're not going to use any exposition. It's just going to be lines. You are the character."

Ross states that when he sat down to write the show, he wanted to tell the story the way a bard might. He imagined performing the show for people who had never seen "Star Wars," and tried to determine the best way to show them what the trilogy was about. "It wasn't until later that I realized that this is what C-3PO does when he's telling the Ewoks the story...you recognize certain things that he's doing, and that, in essence, is what this show is."

Like most theater pieces, the "One Man 'Star Wars' Trilogy" started with a written script. Ross had a thorough knowledge of the original trilogy already, so "the writing aspect of it took about eight hours [including revisions]." But a script alone wasn't enough. "Eventually I had to get rid of the script and put it on its feet, because the lines are not enough. It's how are you going to be able to act this out...sort of standardizing a way you play as a child."

Once Ross had a sense of what to include in the show, he had to figure out how he would perform each part. "I had to choreograph the show, and that's where T.J. was absolutely instrumental, because I couldn't see myself. I wasn't going to do it in front of a mirror, because then [I'd] spend all of [my] time watching [my]self."

Fortunately, Ross and Dawe didn't have to start from scratch when they choreographed the show. "It's actually framed up so that things on stage happen the way that they actually happen in the film. So it's only a matter of mimicking what's already there. But how do you make a transition [from] lightsaber fighting to kissing? You have to make it, or you have to something to bridge those two jumps."

It took three days of rehearsals, working four to five hours per day, to complete the show. Ross performed while Dawe gave feedback. The final product hits the highlights of the trilogy, but keeps enough detail for the show to make sense. "[The show] doesn't even begin to touch the subtle things that are there, but I don't want to be the films. I mean, the films are going to be what they are...you don't want to supplant the film, you want to emulate it in some way."

Fifteen hours of rehearsal may not sound like much, but the show is extremely strenuous from start to finish. We'll look at what a performance of the show is like next.

In addition to the "One Man 'Star Wars' Trilogy," has written and performs other one-man shows, including "One Man 'Lord of the Rings'" and "One Man 80s Blank Tape." He is currently developing shows that revolve around Muppets and a 7-11 store. He's also considered adapting other trilogies, like "Indiana Jones" and "The Matrix," and hasn't yet dismissed the possibility of either.