Browse the article How the National Symphony Orchestra Works 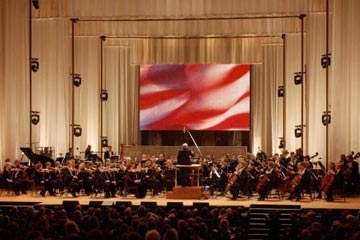 It's not the oldest professional musical organization in America, or the largest, or even the first symphony orchestra to be based in the nation's capital. But the National Symphony Orchestra has risen from humble beginnings in the Great Depression era to become a cornerstone of America's orchestral composing and performing arts scene and an international representative of American culture.

Now, after 78 years, the 100-member National Symphony Orchestra performs many of its 175 concerts a year from the John F. Kennedy Center for the Performing Arts, bringing classical, pops, family and new musical compositions to the public in the nation's capital.

The NSO does a bit more than your typical orchestra, though. The group performs for visiting heads of state and also at national ceremonies, including presidential inaugurations, Independence Day celebrations and the National Memorial Day Concert.

The orchestra has a well-developed educational program to provide exposure to classical music for families and students, and it also provideseducational resources for parents and teachers. Every summer, the orchestra plays a series of free concerts on the West Lawn of the Capitol building for the public. Members also put on a series of performances each year at the Wolf Trap National Park for the Performing Arts in Vienna, Va.

So how did the orchestra get its start? Keep reading to learn about the history of the NSO.

History of the National Symphony Orchestra

It wasn't until 1930 that a famed cellist from the Philadelphia Orchestra named Hans Kindler put together the National Symphony Orchestra of Washington, D.C., for its first show on Jan. 31, 1930, in the midst of the Great Depression.

For its debut season in 1931-1932, the orchestra put on 24 concerts, and its members received $40 a week to do three rehearsals and a concert every Thursday afternoon for the five-month season [source: Washington Post]. That figure may not seem like a lot by today's standards, but during the Great Depression it was a significant amount for musicians. Kindler led the National Symphony Orchestra until 1948, and died a year later.

From its beginning until 1971, the orchestra was based out of Constitution Hall in Washington D.C., which was built in 1929. Now, the National Symphony Orchestra performs a year-round schedule of classical, pops, family and summer concerts based primarily out of the John F. Kennedy Center for the Arts.

Notable Members of the NSO

Music from the National Symphony Orchestra has echoed through the halls of the John F. Kennedy Center for the Performing Arts since it opened in 1971. Built as a national cultural center and a living memorial to the nation's 35th president, the Kennedy Center's history begins in 1958, when President Dwight D. Eisenhower ordered the creation of a national cultural center.

After Kennedy's assassination in 1963, the proposed building was dedicated to his memory, and funds approved to build it on 17 acres of land along the banks of the Potomac River. Construction on the $70 million building began in December 1965, and the it opened to the public on Sept. 8, 1971. Today, the Kennedy Center presents more than 2,000 performances annually and attracts nearly 2 million visitors per year [source: Kennedy Center].

Inside the building is a 2,442-seat concert hall, a 2,300-seat opera house and theaters for family.The Kennedy Center hosts both small-and large-scale performances, in addition to a theater lab, a jazz cafe, a restaurant and bar, and the grand foyer, one of the largest rooms in the world [source: Kennedy Center]. The Kennedy Center receives federal funding to pay for the building's upkeep, but ticket sales and gifts pay for most of the artistic and educational programs that take place inside it.

The center also offers permanent performing arts educational programs, as well as performances for young audiences, and workshops for career development and arts management. And even if you don't live in Washington, D.C., you can still catch something from the building. Each year, 20 million people attend one of the Kennedy Center's touring productions or tune in to one of its nationally broadcast performances [source: Kennedy Center].

For lots more information on music and arts, see the links on the next page.