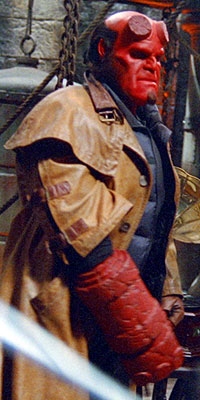 HSW: What then? [What followed the Teletubby stage?]

Jake Garber: When he [Perlman] came back, the final two pieces were a full-facial prosthetic that covered everything with the exception of his lower lip. And I usually waited to put his lower lip on at the very end of the application so he could continue on and have coffee or if he wanted to have a snack or something.

Once those pieces were on, I would begin the painting process. Even though he [Hellboy] seems "just red", there were about four or five additional colors to break it up and get a little bit of shading in there to not make it look like a toy. Then there were four hair pieces that went on. One of them was the samurai wig and then there were the sideburn pieces. Then I usually put the lip on at the point right there, and then he had a little goatee that went on as well. And depending on the day, I would have to make his hand up to look the same color as everything else. Then he put dentures in. He had contact lenses which covered up the entire eye. And, his prosthetic hand. That was the typical day.

There were, I think about a half a dozen or more days that we had him do from the waist up and that was a completely different process. Basically he was covered in prosthetics from the waist up. That took about five hours with about another three or four people assisting in certain phases of it.

HSW: So in the final Hellboy costume, how much of Ron Perlman is visible?

Jake Garber: His eyelids. The guys over at [Rick] Baker's shop really did the amazing job of sculpting a piece to have Ron's features carry through the makeup.