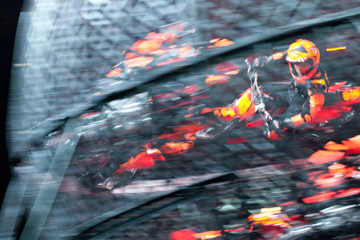 Whistle blowing and engine revving cues each rider to embark upon a set pattern, or path of trajectory, inside the 16-foot steel globe.
(Ringling Bros. and Barnum & Bailey)

The last piece of the Sphere of Fear puzzle is the rider — or, more accurately, the riders. One guy in a globe is not very exciting, but three or five or even eight guys is a show-stopper. Add someone standing at the bottom of the globe — or in the Urias Brothers' case, a woman hanging from the center of the globe by her neck — while a bunch of motorcycles whiz around and you've got an audience that holds its breath until the last motorcycle is safely at the bottom of the cage.

The surprisingly dangerous part isn't getting the motorcycles to stick to the inside of the globe. That's just physics, right? It's the g-forces and blood rush experienced by the riders. "When we go upside down," Urias said, "our heads are at grayout." For one of their tricks, Urias's wife, who is a professional aerialist, hangs from the center of the globe while three riders circle her. "When she crosses the midway point" as she's being lifted into place, "we can no longer see her, and she can't see us."

Luckily, or more likely by design, the Globe of Death act is only about 5 to 8 minutes long. And while there aren't tracks to follow inside the globe, there are patterns in the riders' heads that they follow. It's never precisely the same every time, but the pattern is precise in its execution. Timing is of course everything, which is why you'll see riders rocking back-and-forth in the bottom of the globe. The first few bikes take off, and then the rest rock for a few seconds, revving, watching and waiting for the exact moment they can begin their own loops.

Urias keeps physically fit in order to be able to take the beating that riding inside a globe delivers. "You have to eat right and maintain your weight," Urias said. "If you're heavy, the motorcycle takes the brunt of it." Urias also noted that taking care of the rider's body helps with protection in case of injury. He does basics like pull-ups and push-ups, and his son, who will soon join the act as a regular rider, runs for cardiovascular fitness. These are crucial elements when you're adding gs and removing some of your consciousness while performing.

Author's Note: How a Globe of Death Works

As you can tell from the article, what I love most about the Globe of Death is that it's all right there for you to see, and it's still a breathtaking act. In fact, after talking to Erwin Urias, the more I knew about the tricks and tactics the performers use, the more amazing it is that these things are possible. And you'd think that in more than a hundred years of zooming motorcycles around in a steel ball that tricks would get a little stale, but thanks to break-apart globes, people willing to take risks to add new elements to the acts and new attempts at setting world records, this trick will probably last another century. Maybe an electric-motorcycle version is out there, just waiting for its silent turn in the center ring.