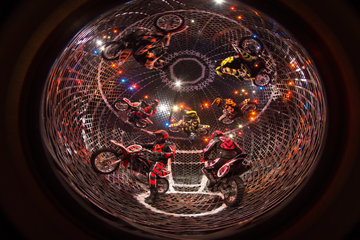 The Torres Family performs with 8 motorcycles in a 16-foot steel sphere, where speeds can reach up to 65 miles per hour.
(Ringling Bros. and Barnum & Bailey)

The globe is typically made of bands of steel (hence the act's alternate name, Globe of Steel) that have been riveted together. Erwin Urias has been riding inside the Globe of Death for nearly four decades as part of the Urias Brothers act, and his family still uses a globe built by his great-grandfather, Jose Urias, in 1912. That's not their only globe, though. Like most acts, they have different globes for different settings and stunts. The one the Urias Brothers use most often is 16 feet (4.9 meters) in diameter and weighs 5,300 pounds (2,404 kilograms). They built it themselves as an improvement on their grandfather's original. "It's evolved into something more user-friendly for us," Urias said.

The globes are also stronger now than they used to be — and they have to be. When the motorcycles are whizzing around inside the globe at about 55 miles per hour (88.5 kilometers per hour), they're applying a force of 3.5 to 4.5 g's to the surface of the globe. "Steel does tend to snap," Urias said more calmly than a man with his job description probably should. But acts have taken that tendency, as well as different steel alloys, into account to create the globes they use today. Urias and his brother are certified welders and fabricators, so they've built it to suit their tricks and to keep them from flying into space.

Every act has its own take on the globe, though 16 feet (4.9 meters) is the most common size. In a smaller globe, you can ride slower and look faster, but the Dominguez Riders use a 17-foot (5.2-meter) globe, and Infernal Varanne promises to use the "biggest globe ever." Split globes can come apart in the center, creating a top and bottom half for riders to navigate. In 2006, the Garcia Family built a globe with a triple split — a top, a bottom, and a band in the middle that the riders circle.

No matter how you split it, or don't, the globe offers something that few other stunts do: the act is visible from all angles and heights. Once you roll that steel globe into place and shine some spotlights on it, everyone can see everything inside. It's really what makes the act so amazing — there's nothing hidden behind a curtain and no optical illusions. Just daredevils testing the laws of physics and the limits of bikes and bodies — which we'll take-on next.