The Edge of the Sea at Palavas by Gustave Courbet 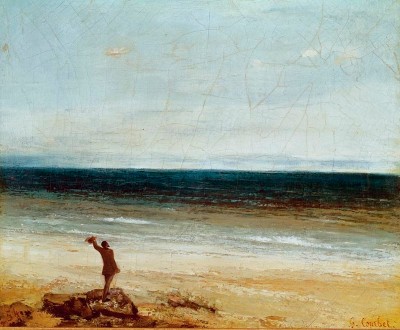 The Edge of the Sea at Palavas by Gustave Courbet is an oil on canvas (10-3/8 x 18-1/8 inches) that is housed in Musée Fabre, Montpellier, France.

As evident in The Edge of the Sea at Palavas (1854), Gustave Courbet refused to idealize his subjects or his aesthetic. He painted a blunt image of modern life in a frank and rough style that came to be known as realism.

Courbet rose to public attention during the brief democratic rule of the Second Republic (1848-51), when the restrictive Salon policies were relaxed. He maintained an independent identity as an artist as the art world returned to more conservative standards during the Second Empire (1851-71).

Light and movement were enormously important factors in impressionist compositions. Go to the next page to see a vivid example of light and movement in another seascape by Gustave Courbet, The Calm Sea.