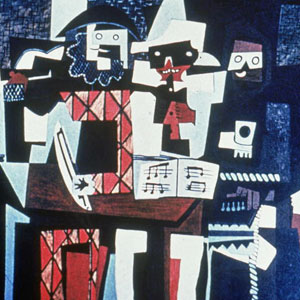 "Three Musicians," a 1921 painting by Pablo Picasso, was done in the Cubist style
Hulton Archive/Getty Images

Give me a museum and I'll fill it.

Pablo Ruiz Picasso was a prolific artist who moved through numerous stylistic periods and created works in various media. The range of his art is vast: There are tens of thousands of works to his name, some famous, some not.

Just a few of the representative pieces, reflecting the progression of his artistic viewpoint and aesthetic, include:

"The Absinthe Drinker," from the Blue Period, depicts fellow artist Angel Fernandez de Soto, with whom Picasso periodically shared a studio in Barcelona. It is predicted to sell for more than $60 million when it goes up for auction in June 2010 [source: Telegraph].

From the Blue Period, Picasso painted "The Tragedy" in Barcelona. It is representative of his focus on melancholy, poverty and the sadness of the human condition characteristic of the phase. Close study has revealed that Picasso used the canvas several times: Remnants of at least three other images have been found in the final painting that hangs in the National Gallery of Art in Washington, D.C. [source: NGA].

The painting typically credited with starting the Cubist movement, "Les Demoiselles d'Avignon" was created in Paris, after Picasso was first exposed to African art, which is credited as influencing this initial work. It is said to depict a brothel scene: Avignon was a Barcelona red light district [source: MOMA].

Picasso completed many portraits and sculptures of his mistress Marie-Thérése Walter, of which "The Dream" is perhaps the most famous. The teenage Walter was Picasso's muse from the late 1920s to the mid-'30s, when the artist was in his 40s [source: Cotter]. The collector who had just sold the work for $135 million famously put his elbow through it in Las Vegas in 2006 [source: The Age].

One of Picasso's rare political works, Guernica was a response to an episode in the Spanish Civil War in which Italian and German forces destroyed the Spanish city of Guernica in support of the Spanish Nationalists. The Spanish government commissioned this work by Picasso to be included in the Spanish display in the 1937 Paris World's Fair [source: PBS]. It hangs in Madrid's Museo Reina Sofía.

The majority of art historians agree that Picasso's work produced between 1907 and 1937 was the most important, at least in terms of the broader view [source: Time]. In particular, the introductions of distortion in Cubism and of collage in Synthetic Cubism are contributions that have had a deep, far-reaching influence on global art.

In the end, though, perhaps Picasso's most profound legacy is his fame. No other visual artist has been the cultural icon that was, and is, Picasso Ruiz Picasso.

For more information on Picasso, art and related topics, look over the links below.

The Blue Period painting "Portrait of Angel Fernández de Soto," aka "The Absinthe Drinker," was pulled from the auction block in 2006 when an art collector claimed it had been sold under duress by its Jewish owner during the Holocaust. It was cleared for auction in 2010 when the claim was withdrawn [source: Vogel].