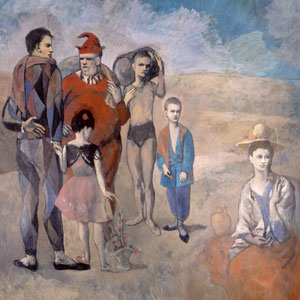 Picasso's work "Family of Saltimbanques" was done in 1905.
Photo courtesy of the National Gallery of Art

Are we to paint what's on the face, what's inside the face, or what's behind it?

Phrases like "the Blue Period" and "the Rose Period" have become part of modern cultural awareness. Lots of people familiar with the terms don't know they refer to Picasso's stylistic phases. He began painting practically at birth, but his fame really took off at the start of the 20th century, with the Blue Period.

Picasso didn't actually call it the Blue Period -- the name instead came later, after reflection on his body of work. It's one of his most popular stages, roughly between 1901 and 1904, and it took place before Picasso moved to Paris. Blue Period works are characterized by a sense of melancholy, blue tones and, often, a focus on the human downtrodden. "Boy with a Pipe" (1905) is a prominent Blue Period work (and the most expensive painting in history when it sold for $104 million at auction in 2004 [source: UPI]). Picasso's 1901 "Self Portrait" also epitomizes the style.

Between 1905 and 1907, Picasso's paintings took on a lighter tone, both in color and subject matter, sometimes depicting circus life. Representative works include "Harlequin Family" and "Family of Saltimbanques," both from 1905, and the 1906 paintings "The Girl with a Goat" and "The Peasants." Picasso's 1906 "Self Portrait" is markedly different from the Blue Period work five years earlier.

In 1907, Picasso ushered in Cubism with "Les Demoiselles d'Avignon." The painting broke with all artistic tradition in its fragmentation, distortion and two-dimensionality. Other examples of Picasso's Cubist work include "Self Portrait" (1907), the charcoal drawing "Standing Female Nude" (1910) and, later, "The Three Musicians" (1921). Along with Georges Braque and, perhaps to a lesser extent, Juan Gris, Picasso created an artistic revolution between 1907 and 1914, moving from Analytical Cubism to Synthetic Cubism and ultimately affecting the rise of Surrealism, Abstractionism and Pop Art. Cubism remained a presence in the art world until the 1930s or '40s, but its centrality faded by the 1920s.

After Cubism, Picasso went on to embrace more a more Classical style in his paintings, drawing and sculpture, and he continued to produce influential work. His most profound impact on the art world, though, even with the popularity of his Blue and Rose Periods and the notable work he created until his death, will always be in his inception of Cubism.

His Cubist paintings are, at least among his followers, iconic.

Artist to the End

Picasso died on April 8, 1973, at the age of 91. He was painting until the end, and he'd been preparing for a show at a museum in Avignon, France, when he passed away. [source: BBC].