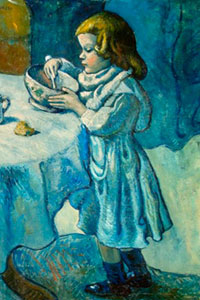 Pablo Picasso's painting "Le Gourmet" was completed in 1901.
Photo courtesy of the National Gallery of Art

Every child is an artist. The problem is how to remain an artist once he grows up.

The story goes, when Picasso started painting as a child, his artist father took one look at his work, gave his brushes to his son and never painted again.

True or not, the point is that it could be true. Picasso was a gifted artist who had an astonishingly prolific career. Born in 1881 in Malaga, Spain, he eventually produced a body of work that included 22,000 creations, not only paintings but also sculptures, mosaics, ceramics and stage designs, before he died in 1973 in Mougins, France [source: Picasso].

Pablo Picasso was born Pablo Ruiz, but he took Picasso, his mother's maiden name, as his public surname. Recognized as a child art prodigy, Picasso went on to study art formally in Barcelona at the age of 14 [source: Guggenheim]. He had his first art show there several years later, and received lackluster reviews for it. But Picasso paid little heed to his critics, moving to Paris soon after and becoming central to the famed Paris art scene of the early 20th century.

Some of Picasso greatest works are part of that Cubist period. Cubism, however, was the third of his recognized artistic phases.