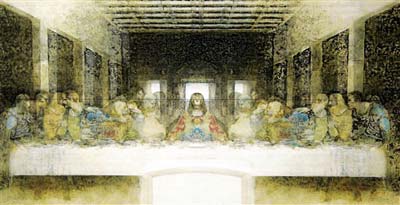 The above image is the composite created by Slavisa Pesci. Some of the features he identified may be visible, such as the knights at both ends of the table.

­­You've likely heard of ­Dan Brown's best-selling book "The Da Vinci Code" and the subsequent movie adaptation. The ­book has sold tens of millions of copies, w­hile the movie, with more than $757 million in box office revenue, stands as the 22nd highest grossing film of all time as of July 2007 [Source: IMDb]. Brown's story centers around the theory that Jesus married his follower Mary Magdalene, had a child with her, and that the descendants of that marriage live today.

­The book also invokes two other popular theories, both of which have been discounted by art historians: that Mary Magdalene, rather than the apostle John, sits on Jesus' right in Leonardo da Vinci's "The Last Supper" painting, and that a disembodied hand in the painting holds a knife. For years, amateur theorists and art historians alike have considered whether "The Last Supper" contains hidden imagery. The latest theory du jour has generated so much excitement that several da Vinci-centered Web sites crashed from an overwhelming amount of traffic.

Slavisa Pesci, an information technologist who's taken up an interest in da Vinci's iconic painting, created an interesting visual effect by overlaying a semitransparent, mirrored version of the painting on top of the original. The result is that two figures that look like Templar knights appear at both ends of the table, while someone possibly holding an infant stands to Jesus' left. Pesci also cited the presence of a previously unseen wine goblet in front of Jesus. Pesci suggested that it may be a depiction of the first Eucharist, when Jesus gave his disciples bread and wine at the Last Supper to represent his body and blood. Pesci didn't indicate who he thought the baby might be, but many amateur scholars have said it's the child of Jesus and Mary Magdalene.

As for the meaning of these ostensibly hidden images, Pesci has no comment, though he believes they may be a product of da Vinci's noted love of mathematics [Source: AOL News]. Da Vinci was also known to write from left to right and from right to left, a technique called mirror writing.

Pesci's theory and its possible relationship to da Vinci's mirror writing, while alluring, present some problems. Chief among them, one da Vinci scholar notes, is that the original painting has deteriorated over time [Source: AP]. The mural is no longer as vivid or crisp as it was when da Vinci first unveiled it. The composite image is distorted and blurry, a problem made worse by the original's current, faded condition. Still, Pesci's composite image does seem to show something or someone.

Before we dissect this and other theories about "The Last Supper," let's investigate the painting's history and subject. Leonardo da Vinci completed the work between 1494 and 1498. It's a wall mural in the Church and Convent of Santa Maria delle Grazie, a UNESCO World Heritage Site. The painting depicts the famous Biblical scene known as the Last Supper, when, shortly before his death, Jesus predicted that one of his followers would betray him. "The Last Supper" actually shows the moments immediately following Jesus' pronouncement, explaining why his followers appear engaged in a frenzied conversation. The painting is considered remarkable for, among many celebrated featur­es, its realism and for portraying the apostles as full of emotion and taking part in an intense discussion rather than simply standing quietly behind the table [Source: The Cenacolo. 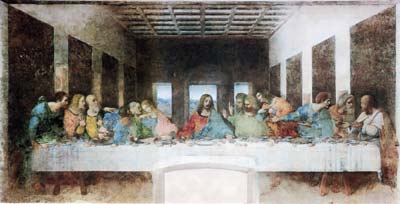 How Contortionists Work
How Todd Bol Started the Little Free Library Movement
Did the Chinese Invent the Superhero Team?