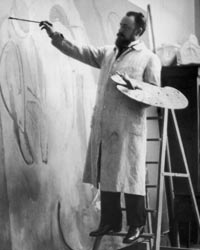 Matisse was the founder of the Fauvism movement, which lasted from 1905 to 1907. The movement got its name when an art critic at the first Fauvist exhibition in 1905 pointed to a Renaissance statue in the midst of the paintings and exclaimed, "Donatello au milieu des fauves!" ("Donatello among the wild beasts!"). Other artists in the Fauvism movement included Gustave Moreau, Albert Marquet, Henri Manguin, Charles Camoin, Andre Derain, Georges Braque, Maurice de Vlaminck, Kees van Dongen and Emile-Othon Friesz [source: Schmahmann].

The Fauvism movement is known for the use of bright, saturated colors and bold brushstrokes. Fauvists left colors unblended, which interfered with the perception of three-dimensional depth in the images. Fauvist painters used contrasting or complementary colors in their paintings, and they typically wanted to use colors that represented the feeling they were looking for -- not necessarily the color the object was in real life [source: National Gallery of Art].

Fauvism was surrounded by controversy. Some critics associated Fauvism with anarchist ideas, which had become popular in the 1890s due to a political scandal known as the Dreyfus Affair, but Vlaminck was the only Fauvist who actively encouraged anarchism.

Critics also accused Matisse and other Fauvists of hedonism. This is partly because Matisse often painted women, many of whom were nude. Some of his paintings also have a mood of lack of inhibition, such as "Bonheur de vivre," which depicts naked men and women embracing, dancing and reclining in nature. "Bonheur de vivre" was also called "Joie de vivre," an expression that referred to hedonism. Matisse himself, however, was a very reserved man with regular habits, and other paintings of his, such as the landscapes he painted in Collioure and his "Classical" pastoral scenes, reflect more conservative, middle-class values.

While critics often tried to tie the Fauves to political or social movements, they were really a loose, informal grouping of artists without ties to any particular belief system. The beliefs the Fauves shared with one another were about color and art, not about politics or social issues [source: Harrison].

For lots more information on Henri Matisse and art, see the links below.